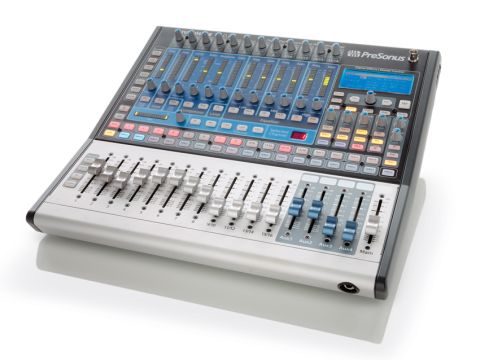 Surprisingly comprehensive features anf quality for such a small package and price.

The PreSonus StudioLive series of mixers has been delivering serious high quality digital audio features at a great price for a few years now. Now these live mixer/DSP/soundcard combos have an entry-level baby brother.

It may have a few less knobs on the channels, less I/O, and no subgroups, but does have the addition of MIDI control and I/O, unlike its larger siblings, meaning that its power, quality, and features are hard to ignore.

A digital mixer with iPad wireless control, a built-in 16 in and out audio interface, and enough effects and processing to look after the needs of many a gig or studio session is seriously cool. To do it at this price is seriously impressive. Let's get stuck in.

Out of the box, its small footprint of less than two square feet feels fairly heavy. Everything feels very solid - the faders do have a tiny amount of lateral play, but are better than most of this size.

Booting up has to be quick, which it is. In reality, digital mixers crash sometimes and need resetting, even ones costing house prices.

The 16.0.2's six seconds is great. You'll increase reliability by using an uninterruptible power supply, which we highly recommend with any digital device that you expect to rely on, especially at a gig.

Testing the drivers on Windows 7 was painless. The drivers currently have a public beta 1.5.1 version available, which does not yet support Windows XP - the final one will.

Despite the efforts of PreSonus Tech support, we were unable to get it to work with a trusty old XP laptop using the 1.5.0 driver. In all fairness to PreSonus, Microsoft have done a terrible job with FireWire drivers in XP, and this has simply proved that it's time to give up on XP and switch to Win 7.

Fat of the channels

The Fat Channel functions are what give this little piece of kit a big-console feel - and sound. It's exciting to find so much control in something with such a small footprint.

The variable high-pass filter has great range, and to have it on a board of this size makes it feel much bigger than it is!

We were also very impressed at the sound of the EQ. The highs are crisp and also delicate, the lows deep and defined, without massive amounts of audible phase-shift, like many analogue mixers this size.

We tried sweeping the mid frequency very quickly. Not only did it feel very fast and responsive, but we heard no sign of jitters or aliasing.

All the features sounded and felt exactly as we'd have hoped, perhaps exceeding our fairly high expectations of them.

The features and controls are very easy to look at and use, with LED bar graphs giving clear visual feedback as to what is happening. The copy and paste of Fat Channel settings from one channel to another is really quick and simple.

The only downside we could find is a lack of gain reduction metering, at the same time as adjusting the threshold and other features of the compressor.

With the metering set to Gain Reduction, as soon as you finish moving any pots, the meters do instantly show the reduction. A minor point, but we missed it.

The lack of input gain recall was disappointing, the largest let down of the 16.0.2. It could have worked similarly to the fader recall mode, using the LED bar-graphs on each channel. In use, however, this can be overcome, by keeping plenty of input headroom and using compressor gain on the channels.

For a studio setup, faders are often the first things to be automated, but with the SL 16.0.2 this is impossible. Initially, the lack of motorised faders seems a disadvantage, but in live environments, there's an advantage in not having automated faders.

Many other digital mixers use flying faders as a controller for other features, such as aux send levels. For live performance mixing, this can be a problem, as it's impossible to creatively tweak FX sends while tickling a fader, as they are on two different pages of the same control.

With the StudioLive family, a fader is always a fader, and it is always that fader. Old-school engineers will love this in a live situation - though done to keep to price low, this was a good choice.

There isn't enough space here to cover how many great things the 16.0.2 does. In top level touring, engineers have been recording sets and soundchecks using remote control and automation with digital desks, to bring them closer to audio nirvana without breaking a sweat.

Many of these setups sacrifice either audio quality or huge amounts of cash to gain this. But the 16.0.2 packs in features at an entry-level price, without compromising quality.