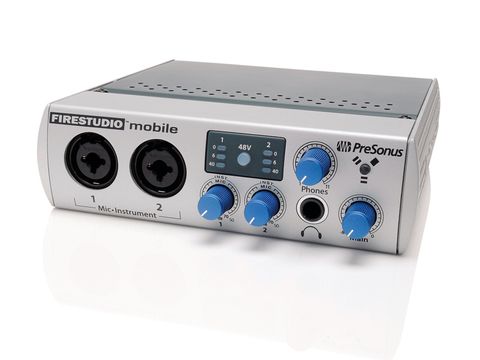 Not the cheapest, but FireStudio Mobile is one of the highest quality mobile interfaces around.

PreSonus's FireStudio audio interface has become a popular choice for many a studio, as it combines a generous 26 channels of I/O with FireWire operation, 24-bit/96kHz quality, digital options, software control and even a 4GB bundle of instruments and audio loops to get going.

For some users, though, this has proved to be an over-specified system, so PreSonus has responded with FireStudio Mobile, a super-compact interface that manages to pack a serious amount of its big brother's features into a portable package.

The first thing that strikes you about this interface is that it's built like a tank. It has a rugged, brushed aluminium finish which immediately gives the reassuring impression that the box won't be bullied by the inside of your laptop bag.

The front panel offers a pair of line/XLR inputs, with gain controls for each channel, a headphone port and level dial and master output knob. Round the back, you'll find twin FireWire 400 ports (new MacBook users take note of this compatibility issue), while further I/O is supplied in the form of six additional 1/4-inch inputs and a stereo pair for the main outs.

By now space has almost run out, so PreSonus has neatly provided a combined solution for the interface's S/PDIF and MIDI capabilities - a breakout cable. In and Out ports are provided for both types of data. Factoring in the headphone output, this equates to 10 inputs and six outputs in total - an impressive number for such a compact device.

The interface is bus-powered via its FireWire port (though the box also includes a separate 12V power supply) and features switchable sample rates, with 44.1, 48, 88.2 and 96kHz all offered.

The preamps for inputs 1 and 2 are PreSonus's own XMAX designs, as featured on the FireStudio, which ooze quality. The sound produced is warm without being coloured and much more detailed from that captured from several rival devices of this size.

Couple this with JetPLL 'jitter elimination technology', zero-latency monitoring and the aforementioned solidity of construction, and this becomes a true 'go anywhere, record anything' interface which should appeal as much to field recordists as it will laptop musicians looking to sling an interface in a bag for gigging or mobile recording. That said, do bear in mind that, for outdoor recordings, the bus-powered interface will eat your battery life for breakfast.

In the unlikely event that you don't have software which you already use for recording, FireStudio Mobile even ships with PreSonus's own 64-bit DAW called Studio One, which can be upgraded to StudioOne Pro if you like its approach. This expands the feature set with additional plug-ins, a dedicated Kore soundpack, lots of audio loops and other assorted goodies.

We've seen many portable interfaces pass through our studio but few feature this amount of I/O and mic preamps of this quality. If you're one of the many people looking for a mobile interface and place these things high on a list of requirements, FireStudio Mobile is worth your serious consideration.