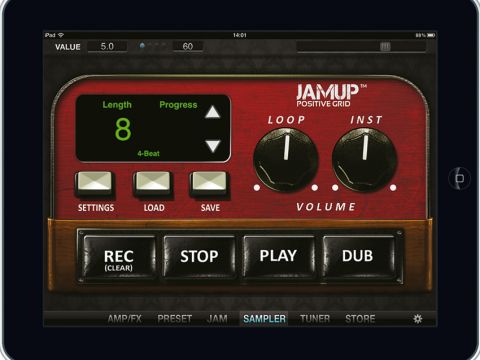 A brilliant guitar facility for your iPad.

A notable trend at this year's NAMM show was the explosion of music making for Apple's iPad, with an ever-growing array of input devices and sophisticated new apps to sate our desire.

One such app is Positive Grid's JamUp Pro - a guitar jam station for the iPad. The app (which is also compatible with iPhone and iPod touch) is an amp and effects simulator combined with a sound-on-sound phrase sampler, and an iTunes player with time stretching. A metronome and chromatic tuner are thrown in for good measure.

"We were particularly impressed that some of the presets were clean sounds, rather than a full-on distortion fest, although that's here too if you want it."

Once installed you can use the app with any of the current range of input devices, whether they send sound through the headphone socket or the dock connector. The first thing to note is the sheer ease of use that JamUp offers - all functions are laid out in a series of six distinct pages all with really good clear graphics and instantly accessible from a row of buttons at the bottom of the screen.

To create the sounds there are six amps on offer and 14 effects. These are accessed via 16 user presets and you can have an amp and up to six effects simultaneously in a chain, all easily moved and placed in the chain by single-touch dragging and dropping. The amps cover what are generally considered as the four major guitar amp flavours - you get a Fender Bassman and Twin, a Vox AC30TB, Marshall JCM800 and 'Plexi', and a Mesa/Boogie Dual Rectifier.

As for the effects, all the usual choices for guitar are included with a couple of generic models and a bunch based on modern and classic stompboxes and other hardware. There's plenty of editing available for both amp and effects - with a couple of finger taps you can call up a larger visual of any model with easily tweakable knobs.

The playing experience is pleasant with a nice degree of touch response and the sounds are of good quality - we were particularly impressed that some of the presets were clean sounds, rather than a full-on distortion fest, although that's here too if you want it. With the included amps and effects we'd say that there is enough sound variation to keep most players happy, but there are more available as in-app purchases should you wish for a greater range of sounds or perhaps a specific favourite amp or effect.

If you just fancy some tempo-related practice the onboard metronome offers a steady rhythm of either a click or a drum sound but the iTunes Jam Player will enable you to call up favourite tracks in your library to dissect and play along with - just hit the load song button to go straight to your Music library.

All of the common phrase-training facilities are available here so that you can easily loop a section of a song and use two large rotary knobs to adjust its speed to suit and/or change the pitch. A third knob sets the relative level of the song against your guitar sound.

If you want to record some playing, switch to the sampler, which at its simplest offers you the chance to create some backing chords for playing over. Overdubbing is also possible though, and it's a great resource for adding parts and creating new songs.

Operation is straightforward and there are a bunch of useful facilities such as a synchronized metronome, auto quantization and programmable auto-start modes. Any recordings can also be saved and exported to your iTunes library.

With it's particular combination of features, JamUp Pro is an excellent resource for anyone who has an iPad and wants to practise guitar. For less than seven quid it also offers exceptional value for money.