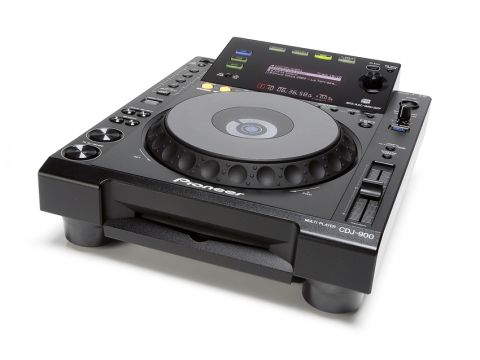 A great deck with a couple of killer features. The CDJ-900 stands robust and reliable in a very crowded market.

Being born into the same family as an over-achieving, better-looking older brother can't be easy. Just as the CDJ-800 sat below the CDJ-1000, Pioneer has launched a lower-priced alternative to its flagship CDJ-2000 model.

But this is not just a simple case of a cutdown feature set, as the CDJ-900 (like the CDJ-800) offers some alternative features to its big brother, which some DJs might actually find they prefer to have in their setup.

Size-wise, the 900 is pretty much the same as the CDJ-2000 chassis but lacks the glamorous robust feel and gorgeous full colour display and also weighs-in at a kilogram less. That said, it still sports the USB port and fast browsing structure and is compatible with the brilliant Rekordbox software for organising and analysing your music before your set.

Navigating folders and tracks is a breeze: with a rotary, push-button jog and a back button you can load your faves in seconds. The unit also sports the same Ethernet link, so four decks can be linked and load from a single USB key.

Unlike the CDJ-800, which lacked a wave display, the CDJ-900 displays a small pixelated waveform if you hit the Info button at the top of the unit. It's not the clearest waveform display, but usable for seeing where a track breaks down and builds. It's also worth noting that this deck is MIDI mappable and will happily control Traktor on plug and play over the HID protocol, which is brilliantly simple to use.

The features that truly set the CDJ-900 apart within the Pioneer range are in the Auto-Beat Loop section located in the top left side of the deck (where the cue points would sit on the CDJ-1000 and CDJ-2000). This lets you easily set up loops and chop them to your heart's content.

This, in itself, is not that new, as it was a feature on the CDJ-800 (albeit without quantising) but the real killer is a little button called Slip. Push this and the deck enables a new slip mode, which opens up a fantastic capability for new performance tricks.

Slip mode essentially allows the track to continue to play silently underneath while you loop, scratch or reverse what is playing out. When enabled, a red inner ring is displayed on the platter screen showing the continuous playback of the track while the usual playback cursor can be moved forward or backwards as usual.

This makes it simple and visual to use, cleans up timing issues and makes creating your own custom build-ups and glitchy effects much neater. It may sound like a simple feature but it really does make for a fantastic creative addition.

This deck is great value, extremely playable and fun. Combined with the USB port, Ethernet link and quantised looping via the track analysis in the Rekordbox software, the CDJ-900 is a massive improvement on the features of both the CDJ-800 and the discontinued CDJ-1000.

If you haven't got the cash for the flagship CDJ-2000 or fancy the additional performance features of Slip Mode and Auto-Beat Loop then it's highly recommended. Just be prepared to be jealous of the CDJ-2000's full colour screen, jog wheel torque adjustments and strip search.