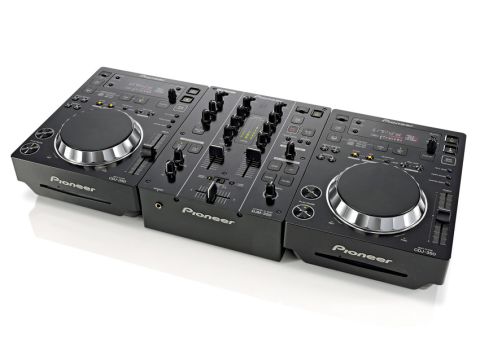 A fantastic, ready-to-go DJ setup that is future-proofed with USB and the RekordBox software.

A short while after Pioneer launched its flagship behemoths, the CDJ-2000, CDJ-900 and DJM-2000, there's a new party-starting set-up in the lower ranks of the Pioneer range that offer an impressive feature set, considering the price.

We're reviewing the new CDJ-350 and DJM-350 as a whole package, but of course they are all priced and available individually.

Previous low-end DJ products have offered little in the way of features and functionality and it wasn't until Pioneer's CDJ-400 that a non-pro product offered new DJs the chance to experience advanced features such as USB integration, effects and MIDI.

As DJ setups go, this is compact, intuitive, flexible and is the cheapest CDJ option for use with Pioneer's RekordBox music management software.

Obviously, there have been some compromises made on build quality for Pioneer to meet the impressive feature set at this price. The jog wheels are not weighted in any way and do feel quite flimsy. In use though, they are absolutely fine once you're used to their feel.

A USB key input is selectable from the surface of the CDJ and at the rear USB MIDI is provided for connecting to digital DJ software such as Traktor.

BPM lock is included as a feature also, on the new CDJs, but relies on the machine's ability to analyse BPMs with ultra-accuracy. Hold BPM Lock down and you can select a master tempo for your mix and every track that is loaded (from any media) will be auto-pitched to that tempo, making mixing even more of a doddle (but this is not beat-sync between decks like Ableton or Traktor offer).

Another clever addition is the beat indicator on-screen, which shows a basic view of a bar moving through each beat. This makes bar match-mixing easier and things like scratching on a beat much simpler too.

There's also the benefit of a master effects section where a single knob level/depth rotary controls the DJM-350s effects. Four large on off buttons switch between a fantastic Gate, Jet (flanger/ phaser), Crush and Filter.

Effects can only be applied one at a time so no layering is possible, plus these are master effects only and cannot be assigned to individual channels or the mic/aux input.

Probably the killer feature of this mixer is the ability to record your mixes direct from the mixer by sticking a USB key in and hitting record. Once the recording is stopped, stick the USB key in your computer and a folder called 'Pioneer DJ' will have been created and inside you'll find a lovely WAV recording of your mix.

Better still, hit the track mark button and the mix will split the file ready for you to burn a gapless mix CD, while retaining the track skipping ability. How great is that?

Another pro-feature on such a value-for-money mixer is the EQ section, which features isolator three band EQ, completely killing the low, mid or high frequencies when turned fully anti-clockwise. Very slick.

Individually these are good products, but combine them and they make a perfect compact home DJ setup and if you added a decent flight case will stand up to duties at bars and clubs while staying future-proof with USB connectivity and the Pioneer RekordBox software. Great stuff.