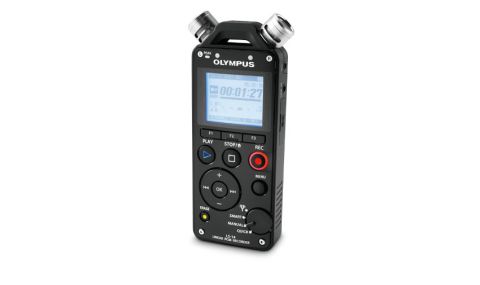 Obviously the LS-14 isn't an alternative to going into the studio, but it is a handy, relatively inexpensive way to ensure you capture those inspired moments of creativity without fail.

You bust out a mega groove at band rehearsals and when it comes to playing it again the following week you've completely forgotten your game-changing beat. The Olympus LS-14 digital recorder could put an              end to such woes.

The recorder outputs in either WAV or MP3 format. It also comes loaded with features such as an instrument tuner, background noise filter and overdub options, the latter can be used to layer tracks instrument by instrument. The device has a plastic casing, but feels sturdy and reassuringly weighty.

Using the stand clip provided we're able to easily mount the recorder to a mic stand and position it bang centre in the room, directly facing the drums and PA, with a guitar amp to the left and bass rig to the right.

We're going solely with the recorder, with no external mics plugged into the device. The result is so-so. The kit cuts through to an acceptable standard, but intricacies (particularly ghost notes) are lost amid distortion and plenty of top-end clipping.

Turning to the device's Smart setting, things rapidly improve. This allows the recorder's settings to be automatically tweaked after a predetermined amount of time (we went for 10 seconds). This means the device can judge which aspects of the sound need to be filtered and noise levels can be automatically adjusted.

In doing so we're greeted with a much better end product - drums are far crisper and guitars sit within the mix rather than overpowering everything in earshot. There's also very little background hiss that often plagues such     recordings. There is still some distortion, but that is to be expected at this price point.

Recording with the central microphone on does give a general bass boost, but not enough of an improvement to make this feature a deal breaker, which is a shame as this is a potentially fantastic addition.

With so many options and setting adjustments available, there is bound to be an acceptable sound for pretty much all tastes, as long as the user realises that they'll get more of a rough sketch rather than a polished masterpiece.