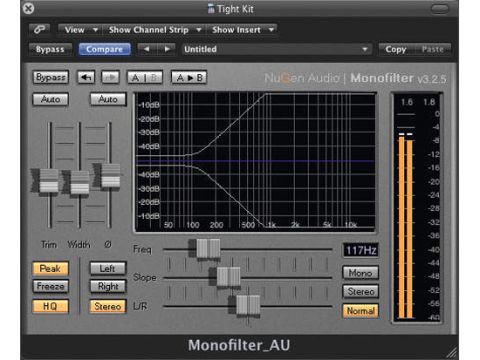 There's little to fault here, with each component of the Stereo Pack being of high quality and useful in its own right.

Plenty of the sounds we all work with are already in stereo, and you'd think this would make producing stereo-rich tracks easy. But things are never quite that simple, and often it's the completely mono sound that we want to be broad and wide, or vice versa.

Thankfully, most music applications offer some basic method of reducing or increasing the stereo spread of a sound, but if you want to push things further, you may be left scratching your head.

NuGen Audio's Stereo Pack includes three plug-ins that are purpose-built for the job - Monofilter, Stereoizer and Stereoplacer - and these are now available at a discounted bundle price. Furthermore, after a couple of years producing Windows-only plug-ins, NuGen has also made the move into the Mac OS X arena.

Probably the most immediately understandable of the plug-ins is Stereoizer. Taking as its starting point the bog-standard 'stereo spread' plug-in (the functionality of which is replicated here by the Linear Width control), this offers substantially more, being designed to add width to both mono and stereo signals.

This additive feature is governed by the Width parameter, and combines with the Resolution and Dynamics controls to enhance the stereo image. If you really want to push things, it also includes a Phase Shift function to manually change the left/right phase relationship, as well as a full phase inversion option. Thankfully, there's also a mono button if you need to check compatibility.

Firing up the plug-in for the first time, we weren't surprised to find that it launches with the Width enhancement and Linear Width set to max. Putting this across a mono bass synth sound, the results are impressively wide, showing off what the plug-in is capable of.

On one particular sound, the Resolution parameter also had a significant impact on the results, with low settings not creating anywhere near as much width enhancement. On a more mid-range-laden acoustic guitar, though, we found the Resolution setting to be less significant. Overall, both situations offered a good level of mono compatibility, though.

By contrast, the Phase Shift feature does distort things. Even at low settings, the inherent L/R delay causes a perceived shift in the stereo image and the potential for phase cancellation when you sum the signal to mono.

The Dynamics control is designed to add modulation, with the rate increasing as you move the fader up. However, we got pretty subtle results, so have to wonder whether this would be better presented as a traditional modulation section with separate depth and speed controls.

The second plug-in, Monofilter, comes at things from a different angle. Designed to help you tailor the balance of signal between mono and stereo, it combines a stereo high-pass filter with a standard width control.

Monofilter lends itself best to improving bottom-end cohesiveness. If you set the filter to a low frequency around 200Hz, it's great for tightening up full mixes. However, when you factor in the panning option, it's also possible to use Monofilter on solo instruments.

On individual sounds, there's nothing to stop you keeping the bass aspect in the centre while panning the higher frequencies. Also, if you find the low-frequency aspect of a sound suffers from phase problems, you can either try the 'auto align' function or use the phase correction slider to bring things into line. In use, this works well, though using a steep filter slope can make the crossover point quite obvious.

Stereoplacer is probably the weirdest of the three plug-ins,. It looks pretty much like a five-band parametric EQ, but the big difference is that it's designed to let you pan each band in the stereo field. You can do this with no additional boost, or use its 'tune' mode to enhance certain frequencies.

You may wonder where Stereoplacer would be useful, but consider any existing stereo sound where you want to manipulate the position of one frequency-specific element. We tried this on a stereo drum kit room sound where the snare drum was off-centre. By using quite a broad Q and finding the right frequency range, we were able to shift the snare closer to the centre while keeping the rest of the sound as it was. Inevitably, this did affect other sounds in the selected frequency range, but you have far more control than you would if you simply reduced the overall stereo width.

You might question whether you need all three of these plug-ins, but having put them all to the test (we found Stereoizer to be the most addictive, by the way), it's clear that all three should prove useful in a really broad range of applications. That said, a decent understanding of stereo and phasing issues will probably help if you want to get the absolute most out of them.

Given the type of processing involved, we're maybe a little surprised that NuGen hasn't also ventured towards a plug-in tailored for vocal processing (akin to Antares Duo, Waves Doubler, et al), but even so, at $99 for the download bundle, even if you can only see yourself using a couple of its plug-ins, the Stereo Pack is still great value for money.

Hear the Stereoizer, Monofilter and Stereoplacer (in that order) do their stuff: