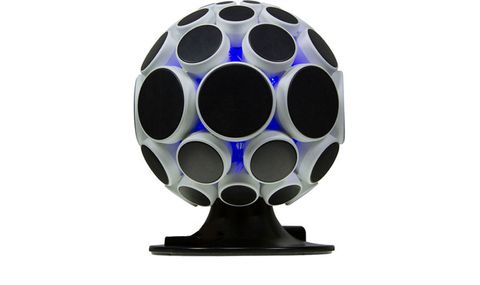 AlphaSphere is for the free thinker - if we could score it purely for creativity or uniqueness, it would get a 5!

Everyone in music production used to have a MIDI keyboard, but we've moved on since then.

Many of our software tools have evolved away from emulating real-world hardware, ideas about music itself have changed, and (I'm guessing) most people don't come from a background of 'traditional' music study, so they don't have any allegiance to the piano keyboard.

This has created a desire to explore alternatives - gesture-based devices, game controllers, touchscreens, and more extravagant solutions such as the Eigenharp. The AlphaSphere is another shot at creating the ultimate alternative controller, with 48 circular pads arranged into a spherical design that interfaces with a computer through USB.

AlphaSphere's creator, Adam Place, makes a good point when he states that the keyboard works for a piano or organ, but has limitations when it comes to interaction with software. The keyboard is great for harmony, composition, and playing chords and melodies, but we need pads, faders, and knobs to add new dimensions and editability to our sounds.

If you had one surface that combined touch, gesture, and the best of the traditional keyboard, that would be fantastic. The pads send notes, CCs, program changes, bank changes, aftertouch, or OSC messages - they're configured through the AlphaLive software. We reviewed the Nexus, the 'basic' version at £679, but there's also the Elite version, at £1,000, which adds a MIDI jack, and user-assignable knobs on the base.

The AlphaSphere's discreet base stops it rolling away, and hosts the USB connection to your computer. By now you're already feeling excited, or sceptical, or a bit of both. The pads are surprising - instead of being 'hard', like drum pads, they're like membranes stretched across the circular openings - they're squishy and flexible, and you can push the surface downwards, in towards the centre of the device; it's not 'percussive' at all.

The AlphaLive software is essential for configuration. The GUI reflects the AlphaSphere's design but isn't clear - a plain layout would be better. AlphaLive hosts samples and sequences, running independently of another DAW. It's enough to get you started, but you'll quickly want to move on.

When connected to the computer, the AlphaSphere emits a blue light from its core, which can only add coolness points. After that you must launch AlphaLive, and choose a preset with a preferred scale, or configure the pads yourself, either globally, individually, or in groups. I skipped AlphaLive's onboard loop playback features, and went straight to Live 9 instead, beginning with the Operator synth.

There's a learning curve - firstly, familiarising yourself with the relationships between the notes on the pads; secondly, adapting to those squishy pads. Frustratingly, there's no way to create slides or glissandos between notes, which is a shame because the shape of the sphere would be great for those types of gesture. There is some extra visual feedback, as the inner light changes to green when a pad's activated, and red when two or more are played together.

The basic set-up is straightforward, and the software customisation, while not perfect, does work, so you can build and save your own presets. With gadgets like this, what separates the dabbler from the power user is figuring out how to apply it; there seem to be so many options. Well, truthfully, for most of the decision-making process you can quit being clever and think of the AlphaSphere as a keyboard; it's just one that's been arranged into a sphere. Then on top of that is the next level of choice - different note arrangements, and CCs that can be sent from the pad pressures. It takes some trial and error before you get to grips with it.

I enjoyed it with a basic grand piano sound, using the presets to achieve different note combinations than I would normally find, and I also built an Ableton Live set-up, using the top row as buttons to launch MIDI clips, feeding an analogue synth patch, while other pads sent notes and CCs, with the CCs controlling parameters such as oscillator pitch, and send effect levels. The 'sticky' option in AlphaLive prevents CCs from 'bouncing back' when the pad is released. If you build an Ableton Live set-up with this combination of clip launching, note triggering, and CC control you have a great interactive performance tool.

The AlphaSphere looks so cool - even better in real-life, which you can't say for most products. The size and weight give it presence, and the lights looks great, especially if you sync it to your DAW, so it pulses in time to your music.

When the AlphaSphere arrived, we liked it initially, then we began to curse it, and then later we came round to liking it again. It needs time, so you can figure out how to best use it. I would seriously recommend that experimentally-minded keyboard players, and percussionists, give it a try.

It is expensive though, and you have to consider the future - if it doesn't succeed, and production ends, you may have maintenance problems further down the line, especially with the vulnerable pads.

But that's a risk with any new instrument. If you can come to terms with what it is and what it isn't, the AlphaSphere is a challenging, enjoyable, and visually exciting alternative to the basicMIDI keyboard.