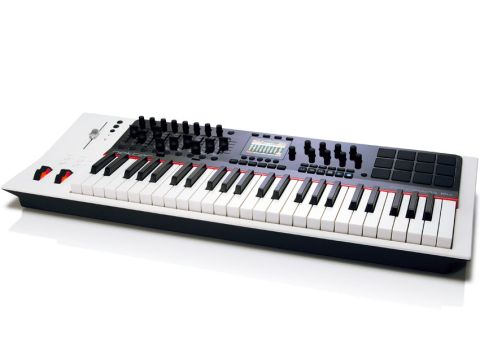 A comprehensive and well- integrated controller that's ideal for power users of Reason.

The increasing use of software-based production tools has long provided impetus to hardware designers to replicate the physical workflow of hardware studio systems. This extends from simple generic MIDI control surfaces to large and expensive ProTools desks.

However, while software can be updated at little cost doing the same with hardware is an expensive business, particular when trying to keep up with software changes. This doesn´t even touch on how the hardware deals with different DAWs or the massive range of third-party plugs they might host.

This brings us to Nektar´s Panorama P4 controller with a four octave keyboard, encoders, faders and MPC-style drum pads. The intention is that the Panorama should be the only DAW controller you will ever need, though Reason is its primary focus.

The Panorama is a visually engaging beast. The sprung - not hammer-action - keyboard is surrounded by an array of controls, with a backlit colour LCD screen sitting centre-stage. Above the obligatory modulation and pitch-bend wheels sits a long-throw motorised fader. Around the back you´ll find two USB ports (see box for more on this), a MIDI Out port and jacks for an external expression controller and foot-switch.

For use as a generic MIDI controller, the P4 is very much a plug-and-play device. As such, connecting it using the main USB port and booting into Cubase, allowed me to get going almost straight away. Using ‘Internal Mode´ the P4 is capable of generating a wide range of MIDI commands, all of which can be customised via the front panel.

This is mostly done using the five soft keys beneath the display alongside the rotary data encoder. As well as editing MIDI CC (continuous controller) messages, keyboard zones, various pad features can be accessed.

Reasons to be cheerful

The P4 really comes alive once you step into its Reason-centred world, and frankly there are cheaper alternatives if you only need its generic control features. For Reason use installation is a little more involved, but nothing too taxing and having registered on the Nektar website, downloaded and installed the latest firmware and drivers, Reason immediately found the P4 using its ‘Auto-detect surfaces´.

Navigation is centred around the P4´s three dedicated Reason modes - Mixer, Instrument and Transport - each accessed from a button above the main display. Below the display´s five soft keys, further buttons support navigating between tracks as well as patch and view selection.

The motorized fader and the associated mute and solo buttons always follow the selected track unless the Lock function (in the Fader menu) is engaged. In Mixer mode one can navigate around in banks of eight channels, with each channel mapped to the Panorama´s small fader section, providing control over level, pan and solo functions. Soft keys allow you to dive straight into EQ, Dynamic, Insert and Send editing.

Instrument mode controls the device assigned to the currently selected sequence track. The most useful parameters, as decide by Nektar, are then directly accessible via the eight rotary encoders to the right of the display. The Menu button provides access to other parameters through a scrolling list though it´s perhaps not as quick as using direct mouse control.

Transport mode is straightforward and adds access to an extended array of features not covered by the controller´s dedicated transport buttons, such as Pre-Roll and Tempo. The Nektar´s display comes into it´s own at times like this, providing plenty of visual feedback from Reason - something that most controllers cannot easily do. Pads, buttons and function keys can also transmit QWERTY macros of up to 8 keystrokes, so there´s lots to get your teeth into.

A man for all Reasons

The partnership of Nektar´s controller and Propellerhead´s Reason 6.5 is a pleasure to use. This is isn´t to say that there isn´t a learning curve involved, but for the most part the process is pretty straightforward. As often happens, familiarity with the software occasionally gets in the way of learning an alternative workflow, but this isn´t an issue specific to the P4 by any means.

It´s clear that much thought has gone into this product, though as further Rack Extensions are introduced to the Reason system, Nektar will need to ensure they work hard to keep the P4 up-to-date. Although the unit is generally well made, some may find it´s glossy plastic looks a bit insubstantial, and I have problem with the cheap knob that sits atop the motorized fader and the slight flimsiness of the smaller fader controls.

If you use Reason and are looking for an all encompassing controller, then the Panorama should fit the bill perfectly. In many respects the fixed environment of Reason is a perfect starting-point for hardware integration, though the new extendable Rack Extension format - by virtue of its rapid expandibility and flexibility - means that Nektar will have to stay on their toes with updates. It´s not cheap, particularly as it offers no audio in/out functionality, but it does the job well.

For other DAW users, there are perhaps other alternatives that offer better control of third-party plug-ins - such as Novation´s Automap-based units. But assuming Nektar keep up with the recent changes in Reason 6.5 then the P4 should be on any serious Reason users must-try list.