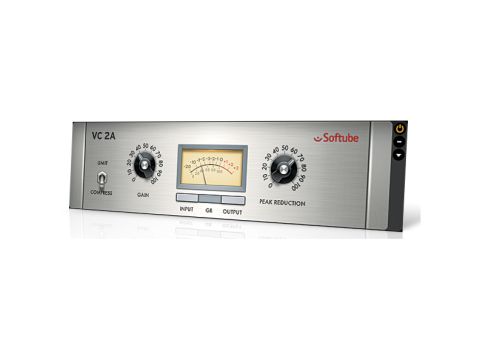 The signature sound is there in abundance - it's just a shame you can't use it independently of the Guitar Rig shell.

The VC 2A is one of three new vintage compressors from NI that feature DSP guts from modelling experts Softube - note that you can buy all three for €199. The plug-ins operate inside NI's free Guitar Rig 4 Player.

The VC 2A models the famous Teletronix LA-2A. This electro-optical design is popular for its simple two-knob layout (input gain and peak reduction) and its forgiving level-dependent attack and release behaviour.

Its only other setting is ratio, which can be switched between limit and compress modes. NI's VC 2A adds three further options that aren't in the original: mix blend for parallel compression, sidechaining and detector low cut (20Hz to 2kHz for both external and internal sidechains).

Vintage gear junkies will also spot that the VC 2A offers input level metering as well as the gain reduction and output level meter options from the original.

With the VC 2A having to be loaded inside Guitar Rig, launching an instance is more complex than IK's White 2A. However, with the additional features on a dropdown panel and the option to fold away the main panel completely, it's certainly more flexible.

And that's before you get into using it in rack formation with other Guitar Rig effects.

On vocals, the VC 2A instantly delivers the seductive and often quite audible squeeze that the LA-2A is famous for, and the sidechain low cut is definitely a useful addition when compressing bass dominant sounds.

But for us, the built in mix blend is the winning extra, allowing us to drive the VC 2A harder than usual, and then blend in to taste.

All told, the VC 2A is a less by-the-book recreation than IK Multimedia's White 2A or, indeed, other LA-2A emulations.