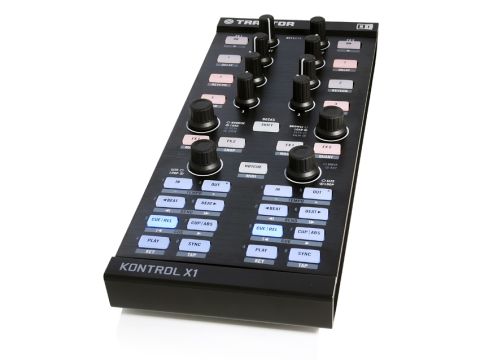 A highly impressive controller that makes up for its shortcomings by being highly intuitive.

You'd be forgiving for thinking that NI's first attempt at a controller for their über-popular Traktor DJing software would be along the lines of Akai's APC40 - replicating the software's GUI and strongest features in hardware, making the visual feedback recognisable and the layout logical.

But you'd be far off the mark - NI has, for better or for worse, squarely aimed its product at one sector of its market - timecoded vinyl and CD users. While this makes sense as a business choice - NI needs to associate itself with currently installed professional club systems and equipment if it's to truly become a standard - it is odd to completely remove the ability, or at least make it very difficult, to use the X1 away from these scenarios.

That being said, NI has admitted that this isn't the last controller we'll see from it, so let's assess the X1 in the context it was designed for.

Anyone who is familiar with NI's excellent groovebox Maschine will instantly recognise the look and feel of the X1 - its black metal sheen and rubberised buttons have a satisfying and reassuring feel and it definitely feels like it will take a beating on the road and in the club. Once the unit is plugged in, like Maschine, it glows an array of colours from its backlit buttons and instantly works with the new version of Traktor - not a MIDI map in sight.

The X1's size and shape are designed to sit alongside a standard hardware mixer - not unlike Allen & Heath's Xone:1D. Unlike the 1D though, the X1 squeezes complete control of two decks into a tiny footprint, and does so quite remarkably.

The X1 is laid out fairly logically, with the effects and transport sections being of main interest. The effects section is comprehensive to say the least with a total of 28 controls for what is essentially a fairly simple element of Traktor. Along with the standard effects on/off buttons and amount knobs, NI has included a Dry/Wet knob, a global on/off button on each effects channel as well as Shift functions to cycle through effects.

NI has also taken the questionable decision to label each of the on/off buttons and knobs with three of the most popular DJ effects: Delay, Reverb and Filter. It's up to you how much of an annoyance this could be - initially, we found it confusing, but after some reshuffling, we got used to it and it does make sense.

Conveniently, hitting Shift and FX On will make these labelled effects active on that channel, so if you have gone crazy with effects selection you can reset it to the defaults with one click and start again.

There are four endless stepped rotaries on the X1, with the first two controlling browser selection and loading with a click while its Shift-functions provide track-seeking and view-changing (ie,. making the browser temporarily fullscreen). Scrolling through the browser works perfectly and loading is swift but the track-seeking resolution could be a little less extreme.

The other two rotaries control looping in a very intuitive manner - turning the knob controls loop length and clicking it down controls loop on/off. This is nothing revolutionary but it's a genius move by NI to give intuitive and fairly comprehensive control over looping with a single knob.

The X1's transport controls finish off the unit, with a total of 16 buttons that double-up as cue triggers when the Hotcue button is active as well as having multiple Shift-functions. The problem with Shift functions, of course, is that not only do they require multiple mappings and, sometimes, a photographic memory, but also the jumping in and out of different 'pages' does nothing for your flow and focus when performing.

This is obviously something NI is very aware of and it's worked hard to label the X1 where appropriate while still maintaining a clear layout. This is the case for everything but the Hotcue function - we repeatedly found ourselves panicking when a track wouldn't play only to discover that we were in Hotcue mode attempting to launch an unassigned cue. The only visual reference for this mode is a slight change in shades of blue depending on your cues and an illuminated Hotcue button.

It would have been nice to see a change of colour to avoid confusion - double-mapping buttons such as Play, Stop and Cue needs to be treated with clarity to avoid errors and we don't feel like the X1 makes it obvious enough.

The launch of NI's Maschine saw the introduction of Controller Editor - a comprehensive editing application for all of NI hardware controllers. For the X1, the options are straightforward but thorough - each button's CC number can be changed, its type selected (ie, CC, Note, Pitchbend etc), channel number and mode be set (ie, toggle, trigger, gate or inc), its value between 0 and 127 changed and when the action of the button occurs decided (ie, on pressing or on releasing).

Similar options are available for the rotaries, which makes Controller Editor incredibly useful and stretches the cost of the X1 quite a bit, if you take the time to map it for other jobs.

If you're an in-the-box DJ, it's more than likely you will find the X1 to be lacking. There are no velocity or pitch controls and no crossfader, making its €199 price tag a lot less appealing for what is essentially a small part of your potential setup.

That being said, touring DJs who are looking for a hardware addition to their current timecode-based Traktor setup will fall in love with the X1. What it really excels at is intuitive control: everything does what it feels like it should and it only takes a few minutes before you become very comfortable.

In context, the X1 delivers maximum performance and is one of the most instinctive controllers we've ever used. In-the-box DJs will need to hold out (X2?), but anyone craving a slim solution to sit alongside club installs need to check it out. It just makes sense.