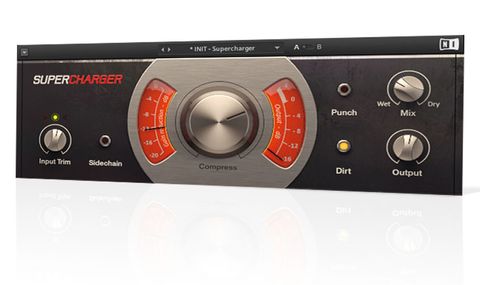 A brilliant compressor that combines perfect ease of use with palpable character and musicality.

Native Instruments' latest plugin effect, Supercharger (VST/AU/RTAS/AAX), is a valve-based compressor emulation. Its interface centres on a big Compress knob with gain reduction and output metering on either side.

The left-hand (input) side houses a Trim knob (+/-30dB) and a Sidechain button, the latter activating an external sidechain routed via your DAW's usual method. On the right (output) are Output level (+/-20dB) and Wet/Dry Mix knobs, and two mode buttons: Punch and Dirt. Punch activates a slower attack time, while Dirt applies a touch of saturation to the input signal. Supercharger also includes 14 presets and A/B memory slots.

The compressor design features automatic make-up gain, so the idea is that you simply use the Input Trim knob to get the signal to a suitable level, then crank the Compress knob to go from no compression right up to maximum pumping.

In its basic state, Supercharger delivers everything from fairly subtle flavour to full-on crushing compression. At lower settings, there's also solid second-harmonic distortion in evidence, and as the compression increases, odd-harmonic distortions also come into play. The auto-gain design means you don't have to think too much about setting it up, concentrating instead on how it sounds.

Setting the Input Trim to its optimum level earns you the widest variety of sounds from the Compress knob, and unless your input signal is particularly variable, hitting that sweet spot is made straightforward by the red 'more/less' advice arrows that appear either side of the Input Trim knob, and the green LED that lights up when the trim is 'correct'.

We tried Supercharger on a range of sounds, including all drum kit elements - it worked particularly well on the room and overhead channels. We also got great results with bass guitar, bass synth and electric guitar. However, the fun really started when we engaged the Dirt and Punch buttons. Dirt adds a tasty serving of saturation, enhancing the odd harmonics and adding edge to the sound. NI has really got this right, achieving a good balance between overbearing and subtle.

Punch, meanwhile, is like an instant 'snap' compression control: the slowed-down attack is just the ticket for toughening up lacklustre snares and kicks. It even works pretty well on blended material such as loops and full drum kit mixes.

The Mix control enables parallel compression to be dialled in, as demonstrated nicely by the 'Parallel Slam' preset. Other presets ('Evil Snare', 'Fat Kick', etc) make good starting points for a number of typical applications, should you need a helping hand.

On the face of it, Supercharger looks like nothing more than a simplified plugin for beginners, but it's actually a superb character compressor that can be readily turned to all sorts of tasks. The simple controls make it very easy to use, and it comes in at a great price... Frankly, we're stuck for criticisms!