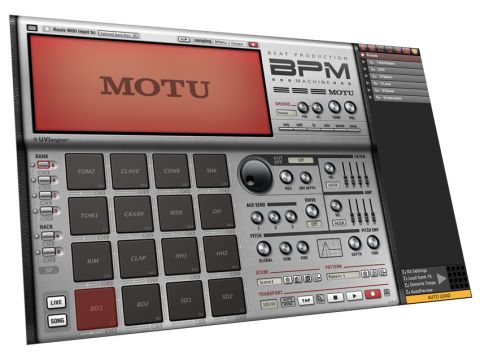 BPM is deep and powerful. Its learning curve isn't steep and, sonically, it delivers across the board.

MOTU's Beat Production Machine (BPM) virtual instrument is the newest urban drum software on the block and looks like it has a lot to offer.

An iLok is required for authorisation, and you can then start installing the 15GB of content, which includes individual drums, hits, loops and instruments - make sure you have a permanently free USB port and plenty of HD space available.

Also, it's worth reading the manual to find where to drop the content files for your particular DAW as this can be confusing.

Once installed, you can either run the BPM standalone or as a plug-in from within your DAW. For our review, we used the BPM as a plug-in within Logic 8 on a MacBook Pro.

Once loaded, be warned that BPM's interface window is a large so you'll need plenty of screen real estate to accommodate it, especially as it can't be resized.

On first look there's a hell of a lot to take in visually - it's fair to say there's a lot crammed into the interface - but after a little time, it's easy enough to get to grips with. Plus, if you hover over a button, a message pops up outlining its function.

The top of the GUI hosts three menus. The first is a folder menu that contains several import and export options. Patterns and songs can be imported or exported as MIDI or audio very easily, though it would be great if there was a way to directly drag the MIDI info in a pattern onto your DAW's Arrange page.

Note that this can be done with audio exports and it's a very slick process. REX and Apple Loops can be imported too. Also in this folder is a preferences menu that currently seems to crash Logic, though it's the only bug we found.

The second menu deals with MIDI assignments for using BPM with an external MIDI controller. You can route your controller to a single part, a bank of sounds and to individual MIDI channels.

Though you could use a mouse to input notes we highly recommend connecting a controller keyboard or MIDI pad controller to get the most out of the BPM.

The large orange window displays the piano roll sequencer, sample editing facilities, step sequencing, FX setups, audio mixer, scene menu (a scene is a snapshot of current patterns, instruments and loops and can be timestretched/rendered as audio) and, finally, song/live modes where scenes are arranged in a timeline/song form.

This is great for live situations; loops/sequences can be dragged, dropped or triggered via MIDI on the fly. You can also sample directly into a pad. It's worth going through the tutorials at the start of the manual (no matter how tempting you think it is to skip them) as there is just so much that BPM is capable of.

To the right of the screen are controls to access the main function areas and global controls for quantise, position (controls the amount of the selected quantise applied) and global velocity, tuning and volume controls.

Further right you'll find an intuitive browser for loading sounds and samples into pads or banks. It's set up so most elements can be easily dragged and dropped to pads, banks (a bank contains 16 pads like an MPC) or racks (racks are for BPM's virtual instruments). This really aids the workflow.

You can load individual sounds into pads, several sounds or samples onto one pad, kits linked with specific patterns, sampled loops and pretty much whatever you can imagine.

Audio can be dragged and dropped into BPM's Clip window where it can then be chopped into segments and exported to the pads in slices, much like on an MPC or in Propellerhead's ReCycle. There's also a transient window (just like ReCycle's) that facilitates chopping of files into easy-to-manage slices.

Recording itself is a breeze. BPM's interface works very similarly to an MPC's but there is much more scope for detailed editing and we love how it works. Drag and drop sounds from the browser onto pads or load a kit, hit record and off you go.

You can easily set the length of the pattern in the piano roll window. Then you can get stuck into editing via the piano roll editor or, if you prefer, you can export the MIDI or audio data to your DAW and edit there in sync with BPM. Replace and Overdub modes are also available and there are authentic-feeling MPC quantises.

Under each virtual pad there are also controls for muting each pad and a volume slider. Further to this, to the right of the pads are more sound shaping options including filter, amp and pitch envelopes, a drive control and aux sends for sending to effects in the effects rack.

There are 12 filter modes including various low-, high- and band-passes, plus comb filters and resonant types. These are controlled by the cutoff and resonance controls, plus there's an amount to filter envelope control. The filters sound very decent and juicy, save for a little stepping at higher resonance settings.

In addition, all of these functions can be automated from your DAW.

The breadth and quality of sounds, instruments and provided patterns is superb. The drums are some of the best we've encountered in this style, plus there are some very useable guitar samples, nasty analogue style basses, rich pads and high quality strings, too.

They all sound punchy and gritty when needed but always remain professional sounding with a pleasant sheen that's obviously been helped by Sterling Sounds mastering. There's plenty here for every type of urban production - from grungy hits and 808s to crisp hats and popping snares.

You could, of course, use BPM for pretty much any style, as the breadth of sounds provided is astounding. Sounds can also be layered up on a pad with velocity zoning for added realism.

BPM allows import of virtually any kind of audio. Not only can you import your existing samples, Apple Loops and REX files, you can also sample directly into a pad, as well as resample BPM's main output.

The quickest way to sample is into a pad. Simply click the pad you'd like your sample to appear on, then select the source you want to sample from in the source window. Next, hit the Sample Record button, hit done when finished and, hey presto, you have a sample loaded on the selected pad.

The captured sample can then be edited using the sample waveform editing facilities, named/saved, then incorporated into your beats. Edit functions include reverse, normalise, silence, fade in/out and unlimited sample layering.

There's also a separate standalone BPM Sampler application included that's used for sampling external sources (such as mics or sound sources connected to your DAW's audio interface) and for capturing the output of any audio track in your DAW.

However, while sampling with the BPM certainly works after a bit of head scratching, it does need explaining better in the manual.

BPM includes a comprehensive mixer that enables projects be completed entirely within BPM. Every part and bank within BPM has its own set of channel strips (much like a DAW) with pan, mute, solo, volume, level meters, output selectors and access to FX inserts.

There's also a master mixer and aux channels for extra flexibility. Sounds can be sent to the FX inserted on the aux channels via the aux controls in BPM's main window.

The onboard effects are plentiful and cover a wide range of staples including delays, reverbs, convolution reverbs, modulation effects, filters, EQ, stereo enhancers, drive, gates, compressors and more. It's incredible how many have been packed in, and their quality is consistently very high throughout the software.

Effects can be added until you run out of processing power and each effect has its own unique set of parameters for sound shaping. It's all very impressive. Finally, to top things off, there's an 'SP' mode that emulates the sound of the legendary EMU SP-1200 sampler.

BPM is a hugely useful and appealing bit of software that's very well-thought-out. Though super-deep and complex within, the interface manages to keep things intuitive, without a huge learning curve.

It sounds, looks and feels great and is one of the best urban music production tools currently available.

Take a listen to some of BPM's many sounds: