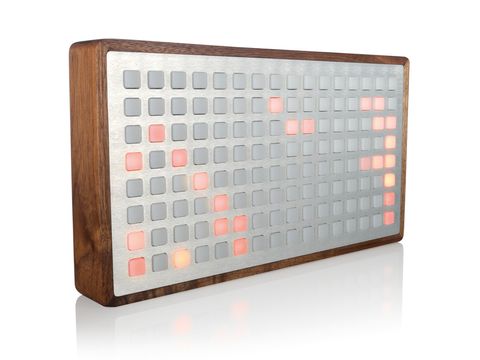 It might not be perfect, but the one twenty eight is truly a delight and an inspiration once it's up and running.

monome's minimalist controllers are designed and manufactured in Philadelphia by a team of just two people.

Everything from the packaging to the printed circuit board is ecologically sourced and ethically implemented, and it's all available under the principle of open source. Even the firmware can be copied and modified.

There are three monome devices in the range - the 'sixty four' and 'two fifty six' flank the 'one twenty eight' that we're looking at here - and there's a kit for building your own, too.

Our review unit's 128 LED-lit buttons are held in place by an aluminium faceplate attached to a walnut exterior. When lit, the LEDs are the colour of sodium lighting, but activating them isn't a case of just jabbing the buttons.

Without the USB connection, the LEDs light up in an unpredictable pattern. The packaging doesn't include a driver disc, so the first thing to do is grab the drivers from the website of chip manufacturer FTDI and download the community-developed control panel app. Only then can your system establish communication with the tidy wooden box.

From the control panel, you can switch between two operating protocols. The first deals only with MIDI, turning each button into a crude note generator. The hardware is not velocity-sensitive, so it's all or nothing.

This mode is useful for some purposes, but it's like buying a Bentley and sticking to first gear. Higher performance comes courtesy of the second protocol option, Open Sound Control, aka OSC.

This is, essentially, next-generation MIDI - a networking protocol designed for musical instruments. It's fast and flexible, but only a handful of audio applications speak it. For most monome advocates, the programming system of choice is Cycling '74's Max/MSP, though Pure Data is also used, and there's also an exceptional VST instrument available.

You could quite happily use others' apps without ever programming your own. With one of these on the go, the device is transformed: LEDs pulse under your fingers, twitching across the matrix as they seemingly respond to your touch.

None of this is easy to fathom, but it's incredibly rewarding once you've got it all up and running. You find yourself treading paths you'd never discover with any other controller, and you may even see music from a new angle. If you don't like the way something is implemented, you can change it.

The ethos behind the monome device and its bare-bones nature encourages users to develop and share their own apps, and for these reasons, you could argue that it's revolutionary.