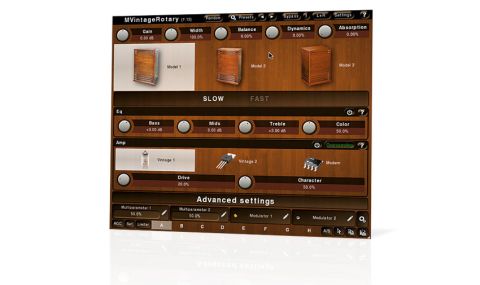 A great-sounding model of the legendary Leslie. Loads of vintage appeal and more uses than you might immediately think.

MVintageRotary (VST/AU plugin) aims to recreate the sound of the legendary Leslie 122 rotating speaker cabinet, in which the input signal is fed via an onboard amplifier into two separate rotating speakers housed within a large wooden box.

The larger speaker sits in a rotating drum, while the smaller one comprises a pair of spinning horns. The resulting effect is either a pleasant chorale or a shimmering tremolo, depending on the rotation speed.

When used with an organ sound, the effect is instantly recognisable, but rotary effects have been proven to work well on other sources such as guitars, synths and even vocals. Indeed, it's for this reason that "organ-less" rotary speaker plugins have started to appear, since most virtual Hammond emulations, such as LinPlug's Organ 3 or Logic Pro X's Vintage B3, already feature their own Leslie emulations, due to the effect being such an essential part of the classic organ sound.

MVintageRotary is easy to get to grips with thanks to a series of helpful info boxes, and all of its main controls are accessible within the main page of the interface.

There are three speaker cabinet model setups to choose from (the same cabinet but miked and processed slightly differently for each), although the sonic differences between them are minimal.

Above these are controls for adjusting the overall gain, width (distance between the two virtual microphones used to capture the cabinet), balance between drum and horn output, and the dynamic and absorption characteristics of the cabinet itself.

Setting the Dynamics control at 100% gives the behaviour of a real cabinet, with lower settings progressively reducing the dynamic range of the tremolo effect. The Absorption control, meanwhile, simulates the effect of filling the cabinet with absorbent material, deadening the sound.

There's a huge switch for toggling the rotation speed between Slow and Fast, beneath which is a three-band EQ for further shaping the tone of the sound, including a Color control that shifts the focus of the EQ from mid frequencies at higher settings to extreme low and high frequencies at lower settings.

Other settings let you reverse the motion of the drum or horns, switch them to single-channel output rather than stereo, and tinker with the fast and slow spin rates and acceleration times. One noteworthy feature is the ability to synchronise the rotation speed of the drum and the horn to the tempo of your project - clearly not an option with a real Leslie!

A critical area that's often underrepresented in Leslie emulations is the distortion introduced by the amplifier. MVintageRotary gives you a choice of three different amp types (Vintage 1, Vintage 2 and Modern), each with adjustable Drive and Character parameters. These deliver a range of overdriven tones from subtle to aggressive, but all with a satisfyingly authentic grittiness that never becomes overly fizzy.

MVintageRotary's sound is remarkably faithful to the real deal, and it could easily become an essential addition to any producer's toolbox, not just for its considerable organ-elevating capabilities, but also for the distinctive flavour that it can bring to virtually any other kind of part, too.