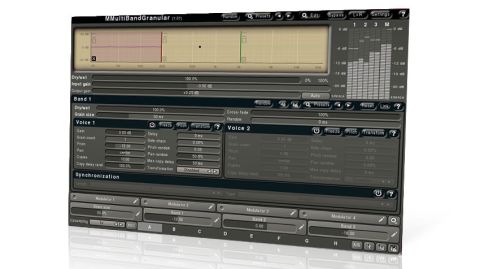 Esoteric, ambitious, sonically impressive and at times frustrating, MMBG is Melda's wackiest, most niche plug-in yet.

The concept behind MMultiBandGranular is thus: take a powerful granular synthesis engine, complete with a battery of modulators, and make it available to up to six separate frequency bands.

When you first launch MMBG, the immediate impression is that it's simply too powerful to be practical. There are two view options: a not-very-effective simple one with predefined controls, and a complex one, giving access to absolutely everything.

The level of detail in the latter is so great that most of the controls are housed in pop-up windows, and while we understand the logic behind this - reducing clutter is clearly the goal - the result is confusion.

The presets don't help much, either. Granular synthesis needs to be tailored to the audio being processed, but even allowing for that, these are just too out-there for most purposes, largely due to overuse of modulation.

MeldaProduction has instilled MMBG with its formidable and now-familiar array of modulation options, and to that end there are four Modulator windows, each offering a huge range of signal-shaping features, including envelope followers, LFOs and pitchshifting, with freely definable assignments and ranges.

It's quite awe-inspiring, but granular synthesis sounds mental enough anyway, and by compounding the weirdness with oscillating modulation, the results are often beyond usable.

Still, with a certain amount of care you can use an LFO to sweep the pitch of, say, the bass end within a certain range, bounce the upper range of your mid band up and down, and pull off all manner of creative stunts. For realistically useful results, though, you'll want to limit yourself to one major modulator at a time.

What is undeniably impressive about MMBG, however, is its long list of useful little touches. The Maximise function can make the sound much punchier, while Automatic Gain Compensation avoids wild changes in level.

The sidechain is another powerful feature, using an external signal to define the grain ratios rather than the incoming audio. There's even an Auto-Tuner effect and the ability to randomise specific parameters or even the whole patch.

One thing we didn't have the setup to try but that sounds great in theory is the ability to process 8-channel surround. If only there was another The Matrix sequel in the works - we'd love to hear this on the soundtrack.

Surprisingly, we actually find MMBG most useful as a bread-and-butter signal processor. By using it in a gentler fashion, the granular processing can add texture to a signal rather than transforming it. In this capacity, it's truly excellent for beefing up thin drum loops - the results can be surprisingly warm. It's also fantastic at adding very pleasing top-end grit, giving an overly clean signal real mix presence.

Ultimately, MMBG is reasonably versatile for such an extreme and distinctive effect, but it's not the kind of thing most producers are going to find everyday use for. The learning curve is pretty serious, the interface will split opinion and the presets are not obviously useful. But despite all of this, MMBG's low price makes it an appealing and affordable indulgence.