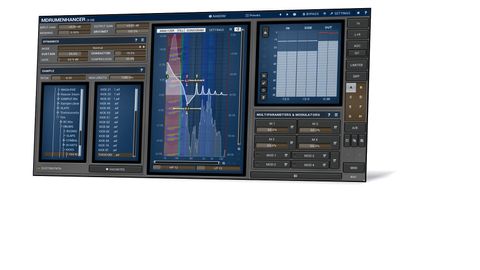 If you find conventional sound replacers hit or miss, Melda's alternative can quickly add just the elements your sound misses .

Marketed as a "modern alternative to drum replacing", MDrumEnhancer is an effect plugin (VST/AU/AAX) designed to combine the individual tracks of a multitrack drum part with triggered samples, which are resynthesised according to the characteristics of the input signals (the actual process is a secret), in order to, well... enhance them.

The triggered sounds can be shaped using dynamics and EQ, with the latter configurable as a dynamic equaliser.

The standard MO is to use MDrumEnhancer on an auxiliary channel, as you would a reverb (although there is a wet/dry mix control for direct insertion), and mix it with your drums. You're always going to need the original sounds, because the processed samples don't have transients - they're only intended to improve the body of the sound, not replace the whole thing.

They've also had most of the mid-range removed, so with kicks and toms you get added weight and some bright air left over from the subtracted attack, while the snare drum samples enhance the body of the sound and the fizz of the snare wires.

It comes with a small set of kick, snare and tom samples in a range of styles (acoustic and electronic), but perhaps more importantly, you can drag your own samples in, and they'll be put through the process required to make them work as 'enhancing elements'.

The sample can be detuned up or down by up to an octave, and manipulated in the Dynamics section. The Mode settings offer three attack times (Normal, Fast or Smooth), although all are relatively slow.

The Sustain parameter adjusts the fade time of the enhancing sample, even stretching to a reverb-like effect up to about six seconds long; while the Character control is essentially a bass/treble tilt, from very dull and bassy at 0% to very thin and bright at 100%. A Compression control brings up the tail of the sample, and a Gate prevents spill captured in the source recording triggering the sample.

The metering is clear and flexible, and includes a sonogram; the Automatic Gain Compensation button allows for sensible comparative listening; and as with all Melda plugins, all sorts of stereo processing is catered to, including Mid/Side and Left and Right only, although that's not hugely useful in this particular case.

The first thing we noticed was how accurately MDrumEnhancer tracks the input signal and triggers its loaded sample. Dynamic tracking can be an issue with many drum replacers, but MDE effortlessly follows the envelope of the source.

The next observation is its corrective and creative potential: it really does add fizz and space to lacklustre snare drums, and impressive weight to weak kick drums, as well as enabling shifting of stylisation by working, for example, a jazz kick sound into the mix. The sustain element sounds really good, too, especially when it extends into a reverb-type effect, with its density adding palpable solidity.

MDrumEnhancer is a unique, maverick device that can quickly and easily add character and style to lame drum tracks. To be clear, it doesn't add punch, but weight, brightness and space are all there to be had; and it differs from an orthodox drum replacer in that the triggered sound has no transient and doesn't stand up by itself. At first glance, it looks very complicated, but it's an intuitive plugin from which you can quickly get very useable results.