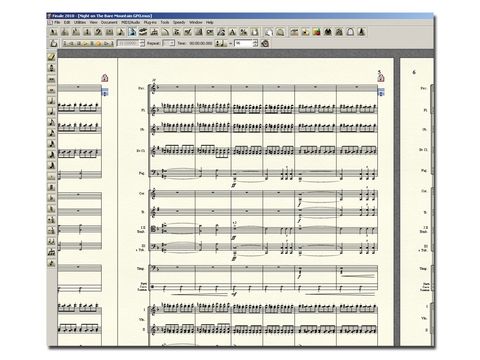 While 2010 isn't a revolutionary update, Finale remains as great as ever for creating quality scores.

If notation's your thing, then you've probably at least heard of MakeMusic's long-running Finale score editor. From the beginning, its purpose was to produce quality scores and parts, and it's long been used by professional musicians and publishers for this very reason.

The manufacturers of all modern scorewriting programs stress how good they are at playing back your music, too, but at the end of the day, they're essentially very smart, specialised graphics programs, not sequencers, and that's how they should be judged. In this regard, Finale comes out looking very good indeed.

The software ships on a DVD, with a 200-page book of tutorials and a quick reference guide to keep by your computer. Installation is a cinch and you can authorise the software via the internet, phone, fax or even snail-mail.

Finale enables you to input notes and chords, articulations and dynamics, words and graphics, to create printed music to professional standard. Use a MIDI keyboard, if you like, otherwise mouse and QWERTY keyboard input can do the same job, albeit a little slower. Scores and parts reside in the same file, so that if you edit a trumpet part, for example, the full score will update to reflect it, and vice versa.

A full range of musical labelling (slurs, bar numbers, rehearsal marks, repeats, etc) can be inserted and infinitely adjusted to your liking, and the resulting score can be meticulously formatted to appear on the printed page just the way you want to see it. Needless to say, as with any major application, it takes time to learn thoroughly, requiring patience and hard work to produce a score to the most exacting standards!

So, onto what's new for 2010, and seasoned users will be pleased to hear that both entry and display of percussion parts have received a comprehensive overhaul, with added visual feedback on what kit piece each note of the stave represents, and the ability to copy back and forth between regular notation staves.

Percussion Layouts control how individual elements of the kit are displayed in the stave, and there's a Percussion MIDI Map to ensure correct playback.

Chord symbols have become easier to enter and manipulate, being positioned according to the beat at which they occur, rather than being attached to a particular note (which was previously an inconvenience if you didn't want to enter any notes on that stave).

As with previous versions, you can play in or enter from the keyboard just about any conceivable chord symbol, and even create your own symbols for unusual chords. They can be played back, too, and stopped with the N.C. (no chord) icon.

To be honest, Rehearsal Markings were often tiresome to work with in earlier versions, but now they can be left to organise themselves, so that if you decide to delete one or add an extra one, the others renumber (or 'reletter') themselves, which is very handy indeed. The bar/measure numbering is also much more flexible, with different display styles possible for scores and parts.

Other improvements include a new Broadway Copyist font, support for JPEG, PNG and BMP image files and the ability to use VST/AU effects during playback.

Included with Finale 2010 is an expanded soundbank from Garritan, and joining the pre-existing orchestra sounds are electric guitars and bass, a brushed drum kit, church organs, synth sounds and more.

While it remains the case that anyone wishing to create a detailed and convincing audio track would be best off using a sequencer, these are still welcome additions, especially for those who use Finale's playback as a compositional aid.

Still, the primary purposes of having audio playback in Finale for most users will be note-checking with sounds that resemble the instruments they're allocated to, and secondly, to provide a hint of how the score might sound if played by real instruments - as a demo version for others, perhaps.

Other Finale audio features, such as the importing or recording of a single audio track, may be useful for some musicians, but probably irrelevant to the majority who seek to use Finale purely as a scorewriter.

Such audio-related features are undoubtedly attractive, but if we think of Finale as a tool for producing printed scores, then it's the improvements in the ease of input and the quality of output that are crucial.

To this end, the aforementioned refinements, such as percussion handling, would seem important in the streamlining of workflow, whereas improvements in the audio field, whilst positive, are less relevant to Finale's main job.

Less flashy but more genuinely useful are the clutch of pre-prepared worksheets, which should prove handy for those working in education.

"Finale 2010 builds on an already impressive application, and the high mark awarded reflects this ongoing excellence as much as the value of the new features."

Finale 2010 builds on an already impressive application, and the high mark awarded reflects this ongoing excellence as much as the value of the new features. Even in previous versions, you could create excellent printouts, so perhaps this is why MakeMusic has been exploring the software's audio side in recent years, searching for an edge.

So do you need Finale? For banging out a few string parts or brass overdubs, your existing sequencer, if it has a score editor, may suffice. Otherwise, you could consider a lesser-endowed but considerably cheaper member of the Finale family - see the MakeMusic website for details.

But if you need to produce sophisticated and extensive scores and parts, up to publication quality, you should definitely consider Finale and try the save-disabled trial version.

And lastly, existing Finale users should look carefully at the new developments in 2010 and ask themselves how much they would enhance the uses they put the software to.

Listen to the opening of Beethoven's String Quartet in C# Minor, played back in Finale 2010: