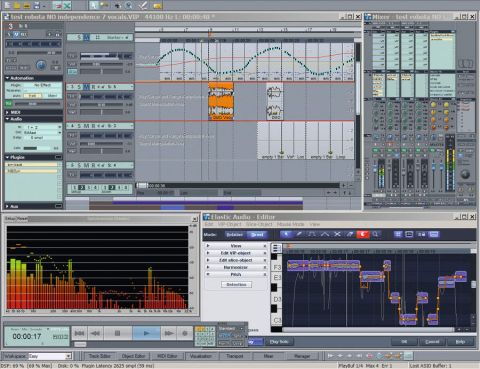 In many respects, Samplitude 10 is one hell of a DAW, but it loses points because of some curious flaws and its slightly unwieldly nature.

Samplitude has been with us in one form or another for over 15 years now, and has cultivated a reputation for outstanding sonic quality. The thing is, just about every DAW now comes with pro-quality plug-ins as standard, so can this double-figured version of Magix´s flagship app still cut the mustard?

Samplitude is a conventional DAW in most respects, but one thing that sets it apart from the pack is its object-based approach. Each audio object (ie, clip) can have its own effects, whether built-in or VST/DX.

Even timestretching and pitch manipulation can be applied as real-time, non-destructive processes, with seven different algorithms on offer, including the new Universal HQ algorithm, which gives good results when used on complex material.

Automation has been overhauled for v10, and as before can either be track level (as with most DAWs) or object level (ie, an automation curve bound to the object). The new Trim automation mode enables you to make relative adjustments (for volume only, sadly), which is ideal when you have complex fades in place but need to tweak their overall levels or superimpose further fades.

The new Overview mode enables you to speedily navigate projects, and there´s now a routing manager that shows which tracks are routed where (although we were disappointed that this matrix could not be used to route in a ‘many to many´ fashion, a la Cockos Reaper).

Also bringing Samplitude into line with current DAW technology is native sidechain routing, which works with some of the included dynamics processors (but not all, oddly), and suitable VST plug-ins, such as FabFilter´s Pro-C.

Audio quantisation makes its debut too, but it´s rather clunky to work with, and when we tried it with a few drum beats, it didn´t sound that hot. Furthermore, there´s no capacity for groove extraction.

One of the most notable inclusions is that of Yellow Tools´ Independence LE ROMpler - until now, the only virtual instrument in Samplitude was the Robota Pro drum synth. Independence LE offers 4GB of top-notch sampled content, including drum kits; acoustic and electric guitars, basses and pianos; synthesizers; ethnic, world and industrial percussion; and arpeggiated and groove-based instruments.

You don´t get that many different sounds per category, though what´s here sounds slick and professional. Unfortunately, though, the plug-in caused our system to crash on numerous occasions, to the point where we had to abandon it.

What´s more, we feel that if the idea is for Samplitude to compete with ‘do it all´ apps such as Cubase, Sonar and Logic Studio (rather than being a pure recording and mixing powerhouse), it should really have its own soft synths too.

An annoying omission on the MIDI front is the lack of a ‘humanise timing´ function, while common actions, such as copying and pasting objects, seem unnecessarily awkward. Audio export sometimes failed to do anything, and garbled up our soft synths when it did (although the Mix To File option worked fine). Setting the program´s Hybrid Engine to anything other than the ‘normal´ mode caused VST instruments to stutter constantly, automating parameters on the master track failed to produce any result, and we also ran into a ‘delete plug-in´ function that removed the wrong processors.

Samplitude has already seen two updates (we´re at 10.0.2 at the time of writing), so it´s frustrating that issues like this still persist. Magix is aware of them, though, so fingers crossed…

There´s plenty to like about Samplitude, of course. The MIDI editor is quick and easy to use, for example - it enables you to see a score view, drum grid/piano roll and event editor all in one window, and the new filtering functions of the latter are super-easy to get to grips with.

On the audio side, Elastic Audio is very impressive, enabling you to intuitively edit the pitch of monophonic audio material in a sort of piano roll view, like Celemony´s Melodyne. The results sound extremely good, whether you´re fixing dodgy notes, creating auto-tuning effects, or even generating harmonies. It all happens non-destructively, natch.

And did we mention the suite of visual analysers? We could go on and on - there´s no shortage of desirable features.

Samplitude´s greatest strength is its sound quality, however, which is due to its pro-standard signal processors, many of which have been tweaked for v10. Advanced Dynamics and Multiband Dynamics both give clean, clear performances, comparing with the best of any third-party efforts, while Multiband Stereo Enhancer´s new Maximize parameter can pull out the sound of the ‘room´.

Room Simulator, meanwhile, is a no-nonsense convolution reverb processor that comes with a load of lovely impulses, while the FFT-based Vocoder sounds just beautiful. FFT Filter enables you to draw any EQ curve you like, and you can even capture the curve from one piece of audio and apply it to another.

Samplitude 10 is a real mixed bag. Some of the technologies and elements that make up the application are intuitive, professional and seriously impressive, while others lack finesse. The way the numerous options are presented can also be a bit overwhelming.

For straight-up mixing or mastering projects, Samplitude could be just the thing, thanks to its superb effects and object-based audio editing. If you´re looking for an all-in-one production package, though, we recommend that you try the demo and weigh up your options, bearing in mind that the Classic and Master editions of Samplitude are a good deal cheaper.

All potential buyers, however, should at least hang on for the next update, to see if Magix can crush all those pesky bugs.

For a more detailed review of Samplitude 10, check out issue 123 of Computer Music.