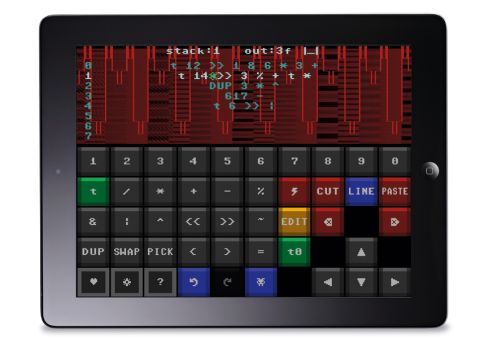 Well worth a couple of quid, especially if you're of an esoteric or code-obsessed orientation.

If you're expecting a neat photorealistic representation of a hardware synth, replete with touchscreen keyboard, well, you're out of luck with Madgarden's new iOS app.

Instead, you get an on-screen waveform display divided into 16 lines, each of which houses a bit of code. Yes, code.

Said code is entered via the calculator-like buttons that make up over half ofthe screen. You get numbers, of course, along with mathematical functions such as * (multiply) and / (divide). You also get a handful of edit functions represented by red and blue buttons - not forgetting the green "t" (time) and t0 (reset).

Codeheads will probably be nodding their heads and saying to themselves, "It looks like RPN!" - and they'd be right. RPN stands for Reverse Polish Notation, and it's a way of entering equations whereby you enter the numbers first and the operation after.

The app doesn't provide any help with understanding this method, however - instead, it leaves you to poke around in the dark, coming slowly to terms with what making changes to the lines of code can produce.

And yet… that is precisely what makes Glitch Machine appealing. Even the most code-phobic glitch-lover can load up the preset examples, type in or altersome numbers and expressions and come up with something totally unexpected. Having done so, you can send your noodlings to the outside world via iTunes, Twitter or email.

The app works in real time, so any changes you type in will take effect immediately, for better or worse. Don't let our head-scratching put you off - we like Glitch Machine very much.

In the right hands, it is capable of producing passages of astonishing complexity from its mere 16 lines of code. Granted, there is a 'Nintendo-punk' quality to everything it creates, but that isn't a bad thing.