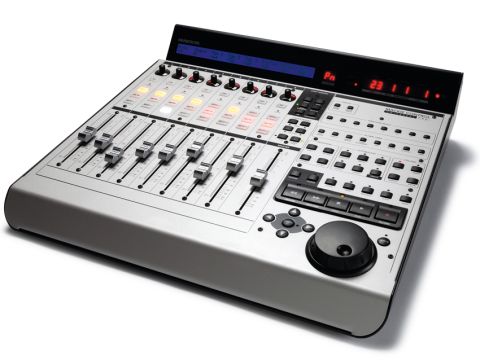 The Control Universal Pro represents a refinement of an already excellent design, rather than a needless reinvention of the (jog) wheel

We've been committed users of Mackie's DAW control surfaces ever since the original Logic Control first hit our studio desk, so when we heard that a new model was on the cards, we were highly intrigued to see what the company could possibly do to improve on the already dazzlingly successful design of the Mackie Control Universal.

The answer, it turns out, is not a great deal, and it's clear from the moment you put the Mackie Control Universal Pro next to its predecessor that it isn't primarily intended as an upgrade for existing owners; there's little difference between the two. Rather, the Control Universal Pro represents an overhaul and relaunch of a unit and its add-ons.

We suspect the reason nothing whatsoever has been added to it is because frankly, nothing needed to be. It delivers comprehensive hands-on control of any compatible DAW and its hosted plug-ins, with bidirectional connectivity, motorised faders and LED-encircled V-Pots giving full 'mirrored' feedback therefrom. It's still immediately intuitive as a basic 'level and pan' mix controller (although there's a bit of a learning curve if you want to really harness its full power); it still offers compatibility with all the major studio packages; it still comes bundled with the excellent Tracktion; and it still costs just shy of £900.

So, what has changed? The first thing that strikes you about the Control Universal Pro is how much more 'serious' it looks than its dad. The housing of the original Mackie Control Universal was made entirely of plastic, and while no one would ever have described it as flimsy, it certainly didn't match up to the heavyweight construction standards of rival boxes from Tascam, Digidesign, Radikal and others. The Pro, however, is made of metal, giving it a much more confidence-inspiring appearance and feel. It also has a smaller footprint and flatter end-cheeks, facilitating tighter placement of the C4 Pro and Extender Pro expansion units alongside it.

The most significant new feature though is the long-awaited addition of a USB port, finally doing away with the need for a MIDI interface in order to get it hooked up - surely a prime requirement of even budget-end control surfaces. It's class-compliant, so no drivers need to be installed under Windows or OS X, and if you don't happen to have a spare USB port, you're still free to hook it up via MIDI DINs in the old-fashioned way. Despite the USB port, the new Mackie Control actually has more regular MIDI I/O than ever before, with three pairs of ins and outs via which to hook up a trio of C4/Extender Pros, hardware synths, effects boxes and the like.

In terms of layout, nothing's changed, with all of the Control Universal Pro's buttons, knobs and faders arranged identically to the previous model's - very much a case of not fixin' what ain't broke. Where it has been beefed up in this area, though, is in the vastly improved button design, the newly weighted and more positive-feeling jog wheel, and the improved Penny + Giles faders, which seem smoother - although that could just be due to their newness when compared to those on our rather aged Mackie Control.

The Pro features fully-illuminated caps on the Record Arm, Select, Mute and Solo buttons that leave you in no doubt as to the state of your mix. The buttons themselves are responsive and satisfyingly tactile, and overall, the mixing experience on the Control Universal Pro is more visually assisted and ergonomically 'solid' than it was on its forebear.

The Control Universal Pro can be expanded with Mackie's Extender Pro and C4 Pro add-on units, which are available for £599 and £799 respectively. The Extender Pro simply adds eight more complete channel strips and another display to the system. The C4 Pro meanwhile boasts four rows of eight rotary/push-button V-Pots, each row complete with its own two-line LCD display, enabling the simultaneous viewing and control of up to 32 plug-in instrument/effect parameters or external MIDI devices.

Up to three expanders can be connected directly through the MIDI I/O on the back of the Control Universal Pro, and more can be hooked up via MIDI interfaces, the limit on how many can be added to the system being down to your DAW (and desk space).

It's worth pointing out too that the C4 Pro can be used without the Control Universal Pro, whereas the Extender Pro can't.

Should you go Pro?

If you've already got a Mackie Control, unless you can get a really good price for it, upgrading to the Pro would seem to be something of a luxury. However, for anyone yet to throw down for a top-spec MIDI controller, Mackie's overhaul re-establishes the Mackie Control and its two extension units as quite simply the best system of its kind on the market.