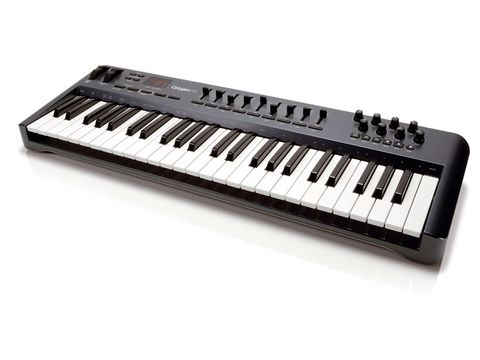 An excellent budget MIDI controller keyboard that continues to improve. Ideal for beginners.

M-Audio's consistently popular range of controller keyboards has been updated for 2010 with the introduction of the third generation of the Oxygen series. Although the Oxygen falls towards the budget end of the M-Audio range, the feature set makes it a highly attractive prospect.

Rather than try and focus on one area, the Oxygen combines a little bit of everything in a neat unit. The combination of controller keyboard, eight 270-degree sweep rotary pots, nine sliders and dedicated transport controls make this an incredibly useful all-round package which should appeal to anyone looking for more hands-on control of software.

The plastic case ensures that the Oxygen 49 is lightweight at just under 3kg, but it's certainly sturdy enough for studio use and should even stand up to light live performance work. The Oxygen is also available in 25- and 61-key versions and a quick glance at the connections round the back reveals that this version of the Oxygen can only send MIDI information over USB.

The omission of the DIN connections makes the third generation Oxygen less suited to controlling MIDI hardware and, as such, one would assume that M-Audio intend it to be used primarily as a DAW controller. The new DirectLink feature reinforces that impression, automatically mapping the sliders, rotaries and transport controls to features in most major DAWs and a handful of popular plug-ins.

The Oxygen's keyboard is relatively basic but acceptable at this price level, with responsive velocity sensitivity and a lightweight, synth-style feel. Those seeking more advanced features such as a weighted key action or aftertouch should look elsewhere in the M-Audio range but at this price level the Oxygen competes well with its rivals in terms of features and build quality.

The keyboard feels tough and well built, but the keys are still light and easy to play. The pitch and modulation controls, previously situated to the left of the keyboard, have now been moved to the top of the unit, which may not be to everyone's taste. Placement aside, the wheels are nicely damped, smooth and quiet in operation.

DirectLink is instantly compatible with Logic, GarageBand, Cubase, Pro Tools, Live and Reason. Simply install the software for your chosen DAW and the Oxygen will automatically map itself, making it even easier for you to take control of your software.

We tested the Oxygen with Logic and GarageBand and found that DirectLink did a good job of mapping the keyboard's controls to each DAW's mixer features, but we still had to do a bit of work to assign controls to more advanced features we wanted to use. Once set up to our taste, the rotary controls and sliders all felt solid and accurate in use.

The Oxygen is a great all-round DAW controller and deserves checking out if you're in the market for a cheap but fully featured USB keyboard. Although the new DirectLink mode is nothing particularly groundbreaking, anything that makes the setup process run more smoothly has to be applauded.

When it comes to further improvements, we can't help but feel there's enough space on the Oxygen's front panel to squeeze in a set of pads. Perhaps that's one for the M-Audio designers to consider for the next update…