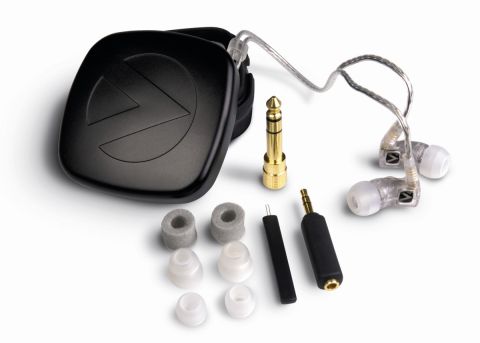 The best sound clarity we've heard from an in-ear set, but may not fit everyone.

We were a little taken aback to hear that M-Audio were launching a range of 'reference earphones', but in retrospect, it seems like a perfectly logical step for them to take.

The IE series neatly complements the company's portable audio interfaces and keyboards - if people are going to make music on the go, it follows that they're going to need something to monitor it through.

The IE-30s sit at the top of the range, with the cheaper IE-20 XBs and IE-10s also available. Designed for recording/ production work and live performance, they feature high- and low-frequency armature drivers and dual-driver crossover for "accurate audio separation".

Despite the inclusion of a Universal Fit Kit and a step-by-step guide, some of us found it rather difficult to correctly sit the IE-30s in our ears.

Once they're in, however, these 'phones sound terrific, offering far greater clarity than any other in-ear models we've tested. They won't replace your speakers, but if you want high-quality monitoring anywhere - or just a first-class set of earphones to plug into your portable audio player - the IE-30s deliver.

All we would say is that you should try before you buy, as you may decide that the 'insertion' process is simply too much to bear.