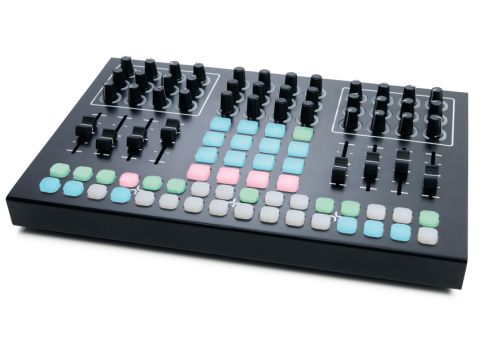 An attractive but pricy controller that struggles to compete with DAW-specific hardware - and iPads.

The guys at Livid don't indulge in plush packaging: CNTRL:R arrives in a plain cardboard box with just a USB cable and a leaflet directing you to find up-to-date resources online.

CNTRL:R has a typical Livid layout, with a combination of knobs (24), encoders (12), faders (eight), and pads with multicolour LEDs behind them (48). Again, typically, the back panel hosts five-pin MIDI In and Out jacks, two 1/4-inch accessory jacks, and Livid's expansion connector - which enables up to eight further devices to be attached.

"A four-deck Traktor set running through Live's audio effects is a powerful combination, and CNTRL:R could handle it."

This is a solid thing indeed, feeling quite '90s with its black metal shell and chubby buttons. In fact, it could easily sit next to the old Yamaha QY700 hardware sequencer.

CNTRL:R does sequencing too, based on using custom devices in Ableton Live - more on which later. We plugged CNTRL:R into a MacBook Pro; it's USB-powered but make sure your laptop's plugged into the mains, because it'll drain your battery fast.

There are four levels of complexity here. The bottom line is that CNTRL:R works as a class-compliant MIDI controller, with any computer running Mac OS X, Windows or Linux, no driver install required, controlling any MIDI-friendly software.

Via the Editor application you can manage presets, change MIDI assignments, encoder speed and LED colours; if you need more than that, you can install Ableton Live and Traktor support files, and get deeper communication with those. Beyond that, you can explore Max for Live (MfL) or Max/MSP integration, and hardware customisation via the rear expansion ports.

We went to Live first - after installing the CNTRL:R MIDI Remote Script, which enables immediate control of clip launching, mixer, return effects, EQ and transport. This is the no-brainer start point, and it worked OK, but you don't feel like you're making the most of the hardware unless you venture further…

So, we loaded the MfL sequencer devices. CNTRL:R detects them and switches between them using the top row of push-button encoders.

On screen, each device shows its CNTRL:R slot number. Up to four devices can be used this way, though only two are available for now - DrumSteppr and SynthSteppr.

The drum-focused DrumSteppr goes in front of a drum rack, then CNTRL:R's 16 lower buttons are used to input sequencer steps, and the upper 16 act as sequence mute buttons. The 4x4 grid is used to load sounds and sequencer patterns.

SynthSteppr is the synth instrument equivalent. You can load up to four instances of DrumSteppr or SynthSteppr at once, and the same four encoders can also be used to select user-defined mapping pages. Working with these devices definitely helps to create the typical hypnotic hardware step sequencer experience.

CNTRL:R's a decent controller for Live, but that alone wouldn't justify buying it. It's not a good clip launcher because there aren't enough buttons, and these days we're spoiled by the visual feedback available from iOS-based controllers - such as names and colours for clips, tracks and scenes.

The sequencing functions add usability, but you need to buy Max for Live to use them, adding another £199 to CNTRL:R's already-hefty price. Sure, MfL's worth having anyway, and some other controllers also need it to fulfil their potential, but it all adds up.

CNTRL:R's touted as a good match for Traktor, and there's a TSI file available for download that includes MIDI assignments for features like pitch, EQ, filters, volume, effects, hot cues and sample deck slots - although you'll probably want to tweak that to suit your own requirements.

The layout and physicality of CNTRL:R suited Traktor better than Live. We can also imagine a more ambitious set-up: a four-deck Traktor set running through Live's audio effects is a powerful combination and this is a controller that could handle it.

As for other software, Livid has a niche in the VJ world, which makes sense because most 'regular' controllers are too music-centric, and CNTRL:R's old-school broadcast vibe would fit in there too. Either way, whatever software you're using, expect to use a ton of masking tape to label your controls.

There's also the matter of that expansion port. Adventurous types can use Livid's BYOB boards to create custom gadgets, or you can be lazy and buy an XPC modular controller, adding extra faders, knobs or joysticks depending on your preference - we think the one with the two joysticks looks pretty cool.

Across every application, two things are clear: CNTRL:R's layout is limited in comparison to more flexible iPad app solutions but you clearly get something with more physicality and you can really enjoy punching some buttons.

CNTRL:R's setup needs to be as streamlined as possible, with one click to download all relevant installers (a PDF manual would be nice as well) - the easier the set-up, the better. We know folks who've eBayed their boutique controllers because they didn't like jumping through hoops to get them going.

For busy people who just want something to work, you'd do better to look elsewhere. The unit only really suits performers for whom customisation is a must, who need to dive into the essence of a controller and make it their own.

If you take CNTRL:R in isolation, then things are rosy; the trouble starts when you consider the options. If you're a Live user who doesn't have MfL then you'd be better off with an APC40 or Lemur. Equally, Traktor DJs are better off with NI's own S4, with its superior integration and built-in audio facilities.

Some folks will be sold on CNTRL:R regardless - there's an undeniable vibe to hardware control. But it has no soundcard, inadequate visual feedback and doesn't integrate spectacularly with any of the particular DAWs it's aimed at.

It's an expensive niche product, but if you need something to sit at the heart of a tactile, expandable control system, then this is your huckleberry.