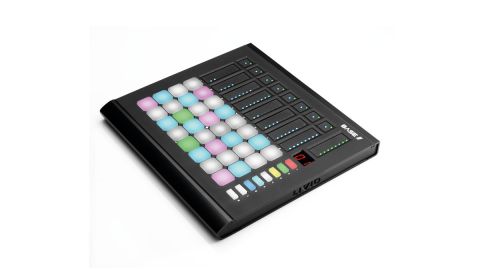 A bigger, brighter, beefed-up sequel that Base newcomers will love. Existing owners may not feel it worth reinvesting, though.

We heaped much praise upon Livid Instruments' original Base MIDI controller when we reviewed it back in September 2013, highlighting its robust construction, versatility and open-endedness, and scoring it a rapturous 4.5/5.

18 months later, with the arrival of its successor, the Base II, what's changed? Where the Base II differs is on the physical front. The good looks, expansive controller layout and tank-like build quality remain, but Livid has made the new unit slightly larger in order to give it the same footprint as its sibling, the DS1, so that the two can be more easily used together.

Its redesigned aluminium chassis measures in at 12x11.5" - one inch wider and deeper than its predecessor. Despite this, it will still, just, fit into the average 13" laptop bag.

The front edge now sports a more ergonomic slope to support the wrist, and the 32 RGB LED backlit, velocity- and pressure-sensitive trigger pads are now raised, rather than being flush to the top surface, as they were previously.

Happily, the LEDs on the Base II are significantly brighter than before, too, addressing one of the few areas that users of the original took issue with; and they can now be made brighter still by powering the unit from an optional external mains adaptor, rather than the host computer's USB port.

Situated above the pad matrix is the familiar array of nine touch-sensitive fader strips and eight capacitive touch buttons, with a set of eight illuminated silicone push-buttons down the right-hand edge, completing the lineup. As with the original Base, all of these controls are freely assignable.

The new thicker, softer pads are highly responsive and, as before, set by default to step through a series of colours when played, depending on how hard you hit or press down on them.

The use of colour goes deeper, however, when you start to configure and customise the unit to your own particular needs using the browser-based editing software.

For example, you can tell each pad to switch to a different colour depending on the application or DAW function you're currently using, so you can immediately tell whether you're controlling your DAW's mix functions, playing notes on a synth, launching clips, controlling effects or editing a synth patch.

As updates go, then, with its enhanced pads, redesigned chassis and mains powering option, the Base II essentially amounts to more of the same, but better - a refinement rather than an overhaul.

If you own the original Base, chances are it'll still be going strong, making the upgrade to Base II arguably non-essential but attractive nonetheless.

If, however, you're in the market for a durable and attractive pad controller that's highly customisable and can integrate with most if not all of your music software, the Base II is a fantastic solution.