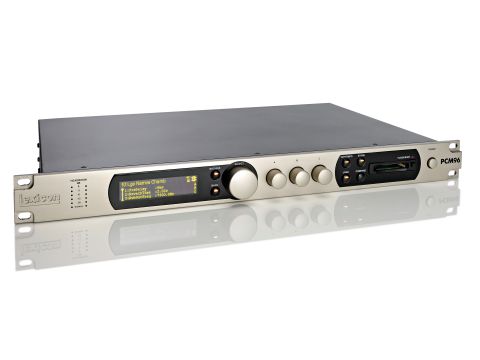 A great sounding and very adaptable unit marred only by an awkward setup procedure.

The PCM96 is a hardware reverb unit that also works as a plug-in. Out of the box it looks pretty professional and straightforward: from left to right you have input meters, a reasonably-sized OLED display, a couple of buttons and four knobs for parameter changes, followed by four more buttons and a flash memory slot.

Simple and uncluttered and pretty much what you'd expect if you've ever used a PCM unit before.

The back panel is pretty full. Aside from the stereo analogue ins and outs which are on XLRs, you have AES digital I/O, two FireWire ports, two Ethernet ports, MIDI In, Out and thru and a Word Clock input. Very comprehensive and in keeping with Lexicon's usual high standards.

Stick an analogue source through it and the PCM96 sounds just like you'd expect a Lexicon reverb to sound. That is, big and warm, and as you move from patch to patch, alternately bright and sparkling to deep and dark.

Lexicon has a vast vault of great-sounding reverbs to plunder and it's used it to very good effect here. There are some great new additions, such as an infinite reverb, which enables you to trap the 'tail' of the reverb, holding a chord or making a drone, from any sound.

There are all the old classics such as the Concert Hall and Room simulations, and even the Resonant Chord algorithm, which offers hours of fun.

When it comes to control, we're not massive fans of multi-function buttons and scrolling through hoards of parameters, so the fact that we can cope with using the PCM96 says a lot for the sensible way that Lexicon has devised its onboard navigation software and control layouts.

The three smaller knobs marked A, B and C give you direct control of the three parameters displayed on the screen, taking you away from the horrors of single knob operation.

There was a time when this would have been the end of the review, but we live in an age when being a simple bit of hardware is no longer enough: we need 'added value'. Those FireWire and Ethernet ports offer exactly that.

The PCM96 comes with a CD containing software, which enables you to control the unit remotely from your DAW and stream audio through it via FireWire, giving you external DSP that provides reverb. This is a great idea, especially if you mix in the box and find that reverbs can be very processor heavy. However, remember that because this is an external unit you only get two installs for any given session.

Installing the software was, if not a nightmare, then pretty close to it. It strikes us that Lexicon didn't pay enough attention to this side of things as, even when we upgraded our system to the latest versions of Logic and OS X, it didn't work. We had to upgrade the firmware in the PCM96 itself and then re-install the software twice before it finally played ball.

Fortunately, once we got it going it worked exactly as it should. In Logic we had to run the system with the maximum I/O buffer of 1024 - with any lesser setting the latency was very big, so using it as a monitor reverb when overdubbing was nigh-on impossible.

The beauty of running this machine from your DAW is that you get the software equivalent of the Lexicon LARC which makes it even simpler to program. There are two ways of using it in this mode: as a plug-in or as a controller for the analogue version.

This means that even if you are using it analogue through a console you can still control it via the Ethernet port like a plug-in, with all the advantages of having the big graphic interface and saving the setting with your song. A very useful feature which works well, although you only have one set of inputs and outputs.

However, using it as a plug gives one extra feature, namely that you can double your inputs and outputs. When streaming over FireWire the PCM96 can run two independent stereo programs on two insert points or up to four separate monos.

As an analogue unit, you have the possibility of running more than one program at a time, but unless you are running it as two monos, it's still just one unit. The plug-in version effectively doubles up the unit.

The modern audio world places enormous emphasis on the flexibility of recording systems. Much of our processing is now done 'in the box', but this puts a lot of strain on our computers' processors. Good reverb is particularly CPU heavy, so anything that can remove this from the equation is definitely very welcome.

However, when you look at the Lexicon and its pretty hefty price tag other factors do come into play. There are a lot of good software reverbs out there - such as Altiverb and IK Multimedia's CSR - and these come in considerably cheaper than the PCM96. What's more, because they're exclusively software-based, their install counts are only dependant on your computer's CPU.

Buying a unit like this requires plenty of justification and you have to look at your personal needs. If you regularly use a hardware unit live or in recordings through an analogue or digital console, the PCM96 will give you excellent results and slot right into your setup.

If you also tend to mix 'in the box' it will open up possibilities that other purely hardware or software units simply can't.

That Lexicon has been at the top of the digital reverb market for 30 years should tell you something about the quality of the algorithms it uses. This is a very fine unit that stands pretty much alone. Gripes about the installation process aside, the only criteria you need to think about are the sounds of the reverbs themselves and whether or not the PCM96 suits the way that you work.

Crucially, this unit gives you the advantages of the analogue and digital worlds, and that can only be a good thing.

Listen to the PCM96 processing a range of different material: