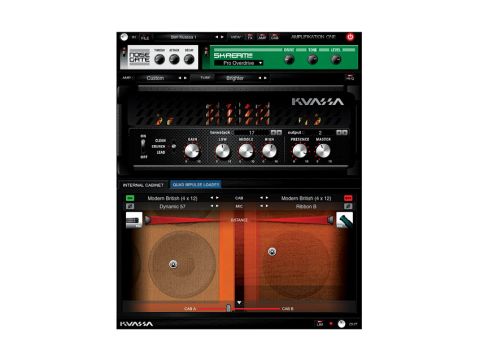 Kuassa kick off their career in style with a tonally capable, value-packed amp sim.

Guitar-slinging freeware junkies will no doubt be aware of Aradaz' line of free plug-ins, with their guitar amp simulations having picked up particular praise. Now the same developers have gone commercial as Kuassa Inc, with their flagship amp Amplifikation One aimed at amateurs and pros alike.

With a price tag of just $50, the price is decidedly un-pro, making it one of the most affordable amp sims around. Further setting Amplifikation One apart from many of its competitors is the fact that it's not based on emulations of specific amps.

Whereas, say, Digidesign's Eleven proudly claims accurate recreations of gear from Marshall, Fender, Mesa Boogie and the like, Amplifikation One is more akin to Magix Vandal, offering custom designs that aim to reproduce the most desirable aspects of schematic designs, tubes and electronics.

There are eight amplifiers, five cabinet models, five distortion modules and five microphones. There's also a four-channel impulse response loader that can be used in place of the regular cab sim, and although there are no effects (chorus, delay and so on), there's a configurable noise gate with threshold, attack and decay, a limiter and dedicated input and output controls.

4x oversampling improves sound quality (though at the cost of more CPU usage), and it's worth noting that the software supports sample rates up to 96kHz.

Diving into Amplifikation One's presets, it's clear that there are some impressive tones on offer. There's a touch too much drive on most, though, and with no input level meter on hand, it's impossible to know what kind of signal level the plug-in is expecting for optimum results. Oh, and there aren't any clean presets at all.

The noise gate works well, as does the output limiter, while the five distortion modules can provide impressive tonal modification. However, it's frustrating that input/output gain levels are saved with many of these presets, making it hard to compare tones without having to reset gain structures for each.

It would have been preferable to have the input/output gain independent of the presets, as Peavey's ReValver does.

When it comes to clean tones, today's software amp sims tend to have things well covered, and Amplifikation One is no exception. However, as soon as we get into slightly overdriven blues tones - à la Fender Tweed - matters become more interesting.

Amplifikation One's Modern Blues Crunch preset makes a solid attempt, while the Custom Crunch preset has impressive bite, guts and tone. When you back off the gain, a credible Angus Young-style rhythm sound emerges.

Both of those presets use the Kuassa Custom amp model, which has clean, crunch and lead channels, and is billed as the software's flagship amp. This is without doubt the most useful of the amp models due to its 19 different tonestack (EQ) types (arranged in order of increasing mids and bottom end) and four power-amp output types.

Get to know it and terrific results can be effortlessly achieved. Unfortunately, the tonestack and power-amp types aren't available for the other seven amp models.

Given that the Custom can deliver pristine, piano-like cleans right the way through to World War III levels of piledriving distortion, we can't help but question whether we would ever actually use the other amps.

In the real world

We had the opportunity to put Amplifikation One through its paces on preliminary mixes for a couple of real-life projects. First up was an Oasis-style indie band. We recorded the original guitar tracks using a Mesa Boogie Dual Rectifier on one side and a Peavey 5150 on the other, miked up with a Sennheiser MD421 and a Shure SM57 respectively.

All guitars were recorded direct, too, so we could run the dry signals through Amplifikation One. The results were great, and it could be argued that its ability to manipulate tones in the mix makes the modelled tones work better than the real thing.

The second project demanded high-gain contemporary metal tones, and Amplifikation One scored relatively well. However, when we tried to dial in the aggressive high end, the software sounded slightly abrasive and struggled with the downtuned low end, not quite achieving the clarity and definition of the amp/mic.

Despite our few criticisms, Amplifikation One is extremely good value for money, and its versatility should allow most players to dial in a good representation of the tone they're seeking.

However, we feel that it hasn't quite captured some qualities, including power-amp response, cabinet resonance, speaker cone break-up, etc; and thus the all-important feel and response to picking intensity isn't up there with AmpliTube or ReValver.

Then again, it weighs in at a fraction of the cost of those heavyweights, and it's also Kuassa's first commercial product. For those looking to make a tentative financial step into the world of amp simulation, Kuassa Amplifikation One could be just the ticket.