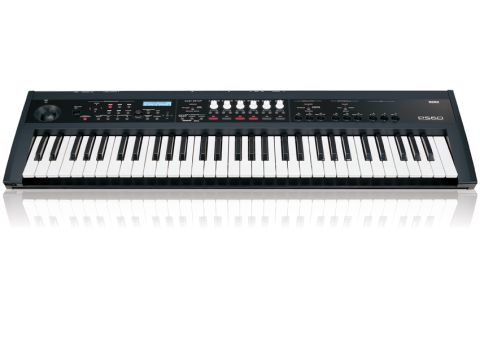 A highly-portable performance keyboard and synth with both feet planted firmly on the stage.

If you're a producer who wants to take their studio productions to the stage, you have some interesting choices to make. If you're a keyboard player, for example, do you want to take a laptop and keyboard controller with you, or would a single dedicated instrument packed full of 'made for live performance' sounds make life easier? If you'd prefer the latter, read on.

Korg's PS60 addresses precisely this need by providing a 61-note keyboard with simple-to-access sounds in six categories: Acoustic Piano, Electric Piano, Organ, Strings, Brass and Synth. 440 sounds are provided in total, all of which employ Korg's EDS-i sound engine at their heart. To play through these, simply click the On button in the bank of your choice and use the Up/Down arrows or the rotary encoder under the LCD to scroll through these presets.

To the right of the sound selection buttons you can enhance these performances with effects and EQ. The latter features dials to enhance or cut bass, mid and treble, while the Modulation effect offers a choice of Chorus, Flanger, Phaser or Vintage Flanger/Phaser. The Reverb section provides Hall, Plate, Room and Delay options.

Both of the effects sections also feature real-time knobs for enhancement, so changing reverb length or chorus speed, for instance, is child's play.

On the left-hand side, you'll find the Performance section, which provides further controls, switches and menus designed to make arranging and performing your live gig as straightforward as possible. You can organise single sounds or layered/split sounds, complete with their effects settings, into Performances, which can then be saved into one of 20 locations - four banks of five Performances - for instant recall, which should be enough to cover a whole gig comfortably.

Along the back panel you'll find MIDI I/O, two pedal inputs (one each for sustain and expression), stereo outputs and a USB port. The latter unlocks the PS60's potential as a direct controller keyboard for your DAW and, better still, enables sounds to be edited comprehensively via Korg's own editor, which can operate as a plug-in in your host software. This feature increases PS60's appeal substantially.

You can edit sounds from the front panel to some extent too but the emphasis here is very much on performance, so rather than endless menus of parameters, only a selection of the usual suspects are offered, including filter cutoff, resonance and envelope settings.

If you're gigging regularly and simply need to have your keyboard requirements met, the PS60 is definitely worth a look. It's functional rather than flashy and shuns the typical 'edit all you like' nature of most synthesizers in order to offer immediate access to its sounds.

Our two main gripes with the PS60 are that it's a touch expensive, and that the synth section is definitely a little light on bass sounds. Otherwise, though, this is a high-capable performance instrument that's light and fast enough to be a tempting gigging solution.

Give some of the PS60's sounds a listen: