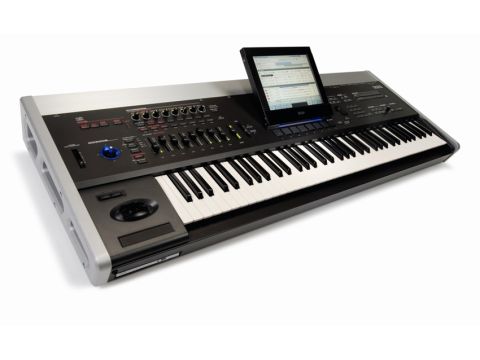 Korg Oasys is a mighty beast with some incredible sounds, but at a staggering price.

The new Korg Oasys has been in development for a long time: and now, after some seven months of refinement to the voicing and OS at Korg the Oasys is available to the public. So, what do you get for your investment?

The Oasys is a Keyboard Workstation, meaning you can compose, record and complete a whole song on this one machine. You can divide up its various facilities into three main components, much as you could on the original workstation; the Korg M1.

First, the keyboard and screen. The Oasys comes in two flavours, which are identical apart from the quality of the keyboard, where you have two options: weighted 88-key or unweighted 76-key versions. This seems a little peculiar as you might think that once you´ve spent five grand you would deserve a full length weighted keyboard. Even with the lighter keys, the Oasys is a heavy unit, weighing in at 25kg. Put it in a flight case and you´ll need two people and an osteopath to carry it around.

But this huge size is unavoidable; the large front panel is crammed with faders, dials and buttons. And of course the monitor screen bang in the middle of the keyboard panel; it´s touch sensitive, bright and clear and it´s where you´ll be doing most of your work. You can swing it from flush on the back panel to nearly upright, and it can be read easily over wide angles; handy if you move around a lot. You access most of the parameters for editing sounds here; Korg have taken the very wise decision of using Linux as the underpinning of the Oasys software. As anyone who uses any flavour of UNIX will tell you, from Linux to Mac OS X, it´s rock solid in operation. The Oasys is no exception; it didn´t crash or freeze in the weeks we spent together, which means it´s better behaved than most mobile phones!

The second suite of facilities is the synthesis engines. The Oasys has three separate systems: the HD1, the AL-1 and the CX-3. The HD1 is a regular ‘sample and synthesis´ engine with 616MB of uncompressed samples built in. There are two ‘Expansion ROMs´ included; one focusing on stereo drum sounds, the other an enjoyable concert piano. You can also record your own samples or read them as AIFFs, WAVs or even in Akai format from the CD drive. The AL-1 is a virtual analogue synth complete with low aliasing oscillators. And finally, the CX-3 is a Hammond organ emulator, (the front panel gives you access to virtual drawbars using the multi-purpose faders). The HD1 and AL-1 sound superb; the CX-3 was a slight disappointment as it was a bit ‘plastic´ sounding, and nowhere near as convincing a tone-wheel organ as, for example, Native Instruments´ B4.

It's enjoyable editing sounds using the touch sensitive screen, particularly when using the KARMA gen 2 facilities, which generates phrases and grooves that you can incorporate into your patches. You can also incorporate this technology into KARMA based wavesequencing, which allows you to access different samples for each note you play.

Did we mention that the Oasys is a MIDI sequencer and Hard Disk recorder too? You have the facility to record and edit up to 16 tracks of 16-bit audio, and burn your finished compositions to CD using the internal burner. There are loads of effects you can throw on your mixes too; 185 effects algorithms in total, including mic, amp and speaker models, and you can use Oasys as a 6-input/10-output real time effects processor for your outboard gear.

All around the world

A potentially attractive feature of the Oasys is the fact that it´s built entirely on updatable software. Korg call this ‘open architecture´; the idea being that they can supply their customers with new software instruments and other facilities when they become available. Any of us running a DAW will already be familiar with this concept; install a plug-in synth or effect, and you´ve expanded your sonic palette.

The problem is, compatibility and stability can be an issue when using plug-ins from multiple software houses, but with the Oasys you can be confident that everything will work as it should. This is because until they offer an SDK (Software Developers Kit) to third party developers, Korg is the only company supplying software for the Oasys, so you are reliant on one supplier for both your hardware and your software.

The benefit is a stable, elegant system to work with; the downside is that without a wide base of developers working on this new platform, you´re only going to get the facilities that Korg think you need. But there´s no question that Korg are committed to the platform; they have just announced a new ‘plucked string model´, the STR-1, which is available to all Oasys users free of charge. And with promises of many feature enhancements over the coming months, your new chosen platform will be well supported.

It´s impossible to do more than scratch the surface of all of the facilities that Oasys gives you in the space available here; suffice to say that the longer we spent with the Oasys, the more we liked it. There´s no questioning its sound quality; this machine sounds huge, lush, detailed and warm; stunningly so at times. Despite being a groundbreaking new product, it still has that trademark Korg sound we´ve grown up with, from the M1, Wavestation, Trinity and beyond. If you´re a fan of that sound, then the Oasys is its pinnacle, sonically and in terms of flexibility. At last, Wavesequencing can be achieved easily, and Vector Synthesis now has more to do with music than quantum mechanics.

However it's hard to figure out who will use an Oasys. It excels at the sounds we hear on TV and movie soundtracks, so score makers could be interested. But as there´s currently no way to view movies on the Oasys´ monitor screen, you would need to have a computer package set-up to sync movies to its internal sequencer, which negates Oasys´ prime reason for existence as an all-in-one package.

The Oasys could excel in the live arena, where many performers need a backing track to play along to. There´s no question that the fabulous touch sensitive monitor screen is a better way of accessing parameters than scrabbling around with a mouse and squinting at the screen under poor lighting conditions. How well the monitor will survive on the road is another question, but it feels sturdy enough to survive a busy day at baggage reclaim in Reykjavik.

As a competitor to a computer set-up, the Oasys loses. If we were to travel back in time to the mid 90s, you could make the argument that professional players are not familiar enough with computers to expect them to invest in and learn how to use a Mac or PC set-up. But we´re living in a post-Windows world now; most of us use the internet every day, and the breed of musicians who shy away from computers is dying out fast. But maybe comparing the Oasys to a computer set-up of the same price is a mistake; Korg know that no pro is going to part with their computer at this stage of the game.

This is a piece of kit that could appeal to the music enthusiast at home with a lot of spare money. And at more than £5,000 for the 76 key version, the price of the Oasys could mean that it will become a status symbol for the moneyed keyboard player, much like a Bang and Olufsen hi-fi. Consequently I expect to see it on the TV more often than I see it in the studio. But if Korg could slash the price to around the £2,500 mark then the Oasys would be a world-beater, no question.