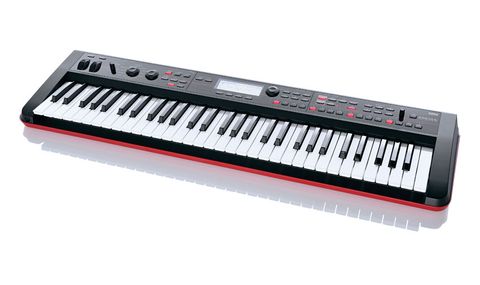 A feature-packed and great- sounding board that lacks real-time performance/editing controls.

The entry-level workstation market is growing fast, helped in the main by budget conscious players who are clamouring for versatile features and decent bread-and-butter sounds at affordable price points. To satisfy this important sector, Yamaha currently has the MX range, Roland has the JUNO series and now Korg has its new KROSS range, which currently includes an 88-note weighted and a 61-note synth-action model, which we're testing for this review.

KROSS 61 is ridiculously portable (9.5lbs) and can run on the included wall-wart or batteries (giving around four hours running time). The black on red colour scheme looks striking and the case shape is pleasing on the eye, there's a nice blue LED mounted in the rear logo, plus the glossy control panel gives the whole package a classy finish.

We would have no qualms about throwing the KROSS 61 into the car (in a gigbag or case) and gigging hard with it, and all the switches/dials feel solid. Obviously, it's not going to be as tough as a board with a metal chassis/case but it's nonetheless sturdily built.

No entry-level Korg workstation would be complete without a carry handle (the X50 had two) and the KROSS 61 has a centrally mounted rear handle for carrying it around like an electronic handbag! It can also be carried on your back in the Korg KROSS travel bag.

The synth-action keybed is fine for the price-point but it isn't as responsive as we'd like - the keys have a long-ish downstroke before sounds trigger and there's only velocity transmission and no aftertouch.

It's a shame that the bigger synth makers have been shunning aftertouch recently, especially when you've got cheaper boards like the Arturia Minibrute and Novation Bass Station 2 including it. Also, to bring out the best in the piano/EP sounds, we would highly recommend connecting a weighted controller, or instead plump for the weighted KROSS 88.

It's also a shame the KROSS has so few real-time controllers. This severely limits its ability as a dynamic live board and as a MIDI controller and makes editing fiddly too. All editing has to be done with the cursors/data entry dial and involves lots of menu diving/button pressing. In this respect, the KROSS is a downgrade from the X50, PS60 and MicroStation, all of which included real-time dials.

Also, the screen gets cluttered at times, though the one included on the KROSS is definitely much better than the tiny screens included on the X50 and PS60. Alternatively, you can use the excellent free KROSS DAW editor for programming. Note that for smooth edits during live performance, you are limited to using the pitch/mod wheels, SW1/2 buttons, or the foot controls, though the 'Tone' page puts the most used parameters (filter cutoff, resonance, envelopes etc) on one page at least.

However! Where the KROSS really scores is with its extremely powerful synth engine and sounds. There's a huge amount onboard for the money (double the amount of wave memory compared to the X50) and the KROSS offers plenty of what the Krome offers for a couple of hundred quid less.

There's a powerful audio recorder that records direct to SD card, a jack audio input for plugging in instruments, for using the Vocoder or for recording vocals into the audio recorder (though a combo XLR/Jack input would have been better), a versatile 16-track real-time/step sequencer with quantise, a dedicated drum sequencer with swing/accent, plus direct front panel 'XOX' style step programming, and two polyphonic arpeggiators (two in Combi mode, one in program mode) that can be used for auto-backings or for more complex performances.

You'll also find pretty much everything you could want in terms of parameters to edit including several LFOs, EGs and filter types with flexible routing, through to poly/mono modes, AMS mixers for cross-modulation and easy splitting/layering with four-way velocity switching.

KROSS 61 is a great bet as a solo or second-tier board for gigging pop/ rock/electronic styles and as an easy to use/set up board for solo performers/ vocalists that want to use WAV/MIDI backings. It's also great for those starting out that want something simple on the surface but that can grow with the user as deeper editing is required, though again, things become a lot easier once you load up the editor and get away from the screen/cursors.

We can see it being popular with function band keyboardists needing a single no-nonsense board that delivers a solid set of staple sounds and effects in a portable 'sling-it-under- your-arm' package.

The 16-part multi-timbral EDS-i sound engine (also seen in the MicroStation) sounds impressive on the whole. It's warm, bright and wide and it's certainly an improvement over the Triton engine used in the X50.

We also think it has the edge over Yamaha's MX range sonically, whilst bottling the character of Korg's more expensive boards. The only caveat is that the sample compression brings with it slightly more artifacts on certain samples, and the filters do step a little when swept at high resonance settings (the Yamaha MX and Juno-Di also suffer from this).

This aside, the KROSS has some really beautiful pianos, playable EPs, good but grainy strings, snappy Clavs, some useable (but not-so-authentic!) organ emulations, inspiring warm synth pads, funky poly sounds, punchy brass and nice acoustic guitars. The effects are good too and enhance the presets nicely, plus there's also a good range of synth bass and leads and the drum sounds are surprisingly good.

The KROSS really packs it in for the money and we dig it a lot. It's certainly a good investment and has a way more powerful synth engine than its rivals. It's just a shame Korg left out those real-time dials, extra outs and aftertouch.