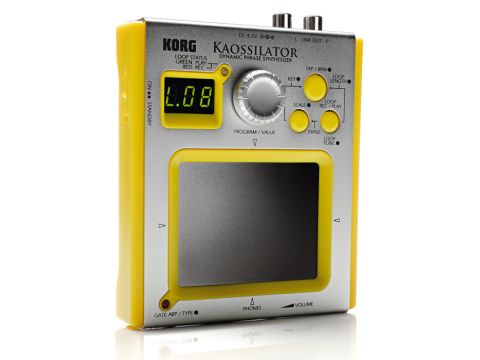 Certainly not pure novelty but more toy than tool at the moment.

Over the course of the last few years we've gone absolutely entertainment-crazy, with distractions packed into ever-smaller boxes and with ever-bigger specs. It's no surprise then that part of the music technology industry has seized on this combination, with Yamaha's Tenori-on being a superb recent example of a (premium-priced) hand-held, portable music-making machine.

Korg's Kaoss effects pads have been around a little longer but the idea is largely the same - to provide a tactile surface that can be used to 'play' or manipulate noises in real time. Now the 'pad is back and this time it's ditched the filters in favour of its own sounds. Welcome the Kaossilator with pad control over note and phrase generation, which puts the fun back into making music.

The design of Kaossilator is simplicity itself and will be immediately familiar to anyone who's had the joy of tinkering with Korg's Mini-KP. The front panel bears the touch screen, used to trigger notes and phrases, with separate parameters map-able to the X- and Y-axes (of which more shortly). Above this main screen, a silver rotary dial allows you to step through different sound or arpeggiator programs, while a trio of buttons to the right variously control BPM, the track-pad's notes 'Scale' and the ability to record and play back looped phrases.

The unit can be powered either by a 4.5V DC power adaptor (supplied separately) or from four AA batteries, which are fitted on the unit's underside. Along the bottom strip, you'll find the headphone out port and the volume slider, which only affects the level at the headphone out. The main audio out, provided by a stereo pair of phono jacks (DJs rejoice) supplied along the top panel, has a fixed output.

Once the batteries were fitted and the power switched on, we promptly lost all track of time having enormous fun meddling about with this box. 'Immediate' is, quite frankly, not persuasive or descriptive enough a word to describe just how instantaneously joyous it is to play with the Kaossilator.

Choosing a program is as simple as dialling the rotary, and sounds are organised into banks according to style. Thankfully, the guys at Korg have usefully tagged these, allowing you to soon get used to their abbreviations. 'L' sounds, for instance, are leads, while chord programs are preceded by 'C' and so on.

In almost all cases, note generation is mapped to the X-axis, and so moving your finger from left to right across the track pad increases the pitch. The Y-axis, meanwhile, provides access to one of several possible parameters, with cutoff frequency, LFO speed and decay time just three of the many treatments you'll encounter. Crucially, though, you're not free to choose these assignments yourself, as they're built into Kaossilator and saved with each sound, so if you'd rather that Trance lead sound controlled effects sends on its Y-axis, as opposed to cutoff frequency instead, then it's bad luck, I'm afraid.

There are 100 preset programs with a more than a few surprises; alongside the expected leads and basses. Plus there's also a winning collection of sound effects and, more unexpectedly still, a collection of beat loops complete with fills and variations depending on where you happen to touch the track-pad. Beat patterns and arpeggiated sequences are a Kaossilator forte, with a collection of 50 different patterns saved in the memory. Any of these can be applied to any program via a press and hold of the 'Gate Arp' button on the bottom panel.

The LED display then shows the currently selected gate pattern that you're free to change. The display reverts to 'Program' information after five seconds and you can switch Gate patterns on and off with a quicker press of the 'Gate Arp' button, which comes with its own helpful red status LED. The speed of the pattern is controlled by the BPM button, which can be 'tapped' or dialled in to select tempo. You can also record and save phrases as loops, by holding down the 'Loop' button.

Another LED lights red and you can then record a pattern of up to eight beats in length, which will then cycle. Patterns can be saved and it's even possible to overdub a number of phrases together, to build up more complicated arrangements. Each part of such an arrangement can be deleted independently, so if you create a layer you don't like, you're not forced to start over from scratch.

Kaossilator is enormous fun and hugely diverting. It becomes a kind of guilty pleasure when it's in your company - despite having plenty of better things to do, I couldn't help switching it on and playing with it constantly.

That said, there's a fair bit to go before this technology would be able to throw off its 'novelty' value and how useful it would be as part of a serious production process is open to debate. I'd argue that, at the moment at least, this isn't a serious tool yet, but it could evolve into one.

In the meantime, if you've a spare £100 in your pocket and are looking for a way to create patterns and phrases in the most fun way possible, you could do a lot worse than this. Well done Korg - keep up the innovation.