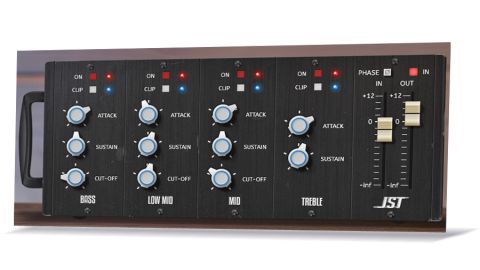 A few niggles aside, Transify makes good on its promise of easy multiband transient shaping, and sounds great doing it.

Transient shaping effects enable the relative levels of the attack and sustain stages of a signal to be raised or lowered.

They're great for emphasising or concealing specific elements within a mix - for example, helping a snare drum to 'pop' out - especially if compression is also being applied, which often has the adverse effect of squashing transients.

The idea is that being able to shape the transients in each frequency range independently gives significantly more flexibility than you would get with a single-band model.

The interface is straightforward, with the controls for the four bands clearly accessible on the left-hand side, and In/Out level faders on the right, together with bypass and Phase invert buttons.

Each band has its own On/Off button, enabling quick A/B-ing of the processed and unprocessed signals, as well as the all-important Attack and Sustain level knobs, and the crossovers (Cut-off).

Four of a kind

Transient designers are, of course, most effective on signals that already have strong transients, like drums, and Transify does a good job of making kicks and snares stand out better in the mix.

However, with its multiband architecture, getting the sound where you want it does take a bit longer than with a single band, as each band has to be manipulated individually. The additional time spent is usually worth it, though, with Transify often yielding superior, more accurate results than a single-band shaper.

The multiband functionality comes in particularly handy for brightening up the snare in mixed drum tracks, since it can do it without bringing the hi-hats forward at the same time - a common problem when trying to achieve the same thing using EQ.

Transify also fares well on other instruments with strong transient elements, working well to attenuate the high frequency 'slap' of bass strings without compromising the attack of the lower frequencies, for example.

With its low price point, Transify certainly makes a tempting alternative to some of the more expensive competition, and its multiband processing does indeed afford greater control of transients than you get with just one band.

In some scenarios, though, such as when working on instruments with a narrow frequency range, or in situations where broad transient changes need to be applied across the entire spectrum, a single-band alternative could actually be preferable.

Also worth knowing is that Transify has no metering at all - not even a 'signal present' light.

Transify is a practical and sonically impressive plugin, able to beef up instruments that are lacking in punch, or to help push back parts that are sticking out too far with the accuracy that only a multiband design can bring. Recommended!