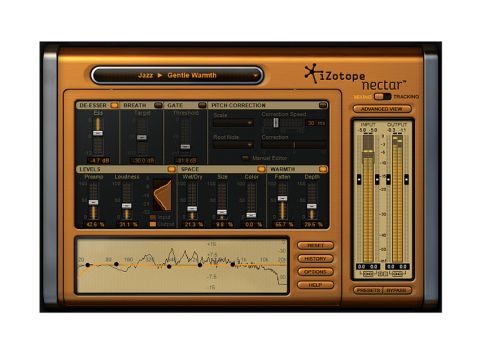 If you've ever daydreamed about an 'Ozone for vocals', then your wish has been granted - its name is Nectar.

iZotope is perhaps best known for Ozone, the excellent all-in-one mastering plug-in. Many users found that its modular approach also made it a great channel strip for general mixing, albeit a rather heavy-handed one.

In response, iZotope created Alloy, a feature-packed mixing-specific channel strip. While Alloy did feature a de-esser, it wasn't a complete vocal solution. So, now we've got Nectar, which is based around the concept of a channel strip that's designed for vocals. Sweet!

At first glance, the interface seems fairly intuitive. It's easy on the eyes and doesn't take up too much space, considering its ambitious purpose. The modules are Pitch, Breath Control, Saturation, EQ, Compressors, De-Esser, Doubler, Limiter, Reverb and Delay - seemingly everything you could ever need.

One handy feature is a visual bracket on the input meter that shows you the range where the level of your vocal should peak under ideal circumstances.

This plays an important role because our immediate concern with a vocal processor that claims presets as an integral part of its workflow is that it might not properly take into account the qualities of the incoming vocal signal. How can you expect it to give your vocal tracks a particular sound if you don't know how close or far it is sonically from the target sound?

The input bracket is only the beginning of iZotope's addressing of this potential issue. You can get straight to work by selecting a Genre and then a Style from the top preset menu. The simplified controls on the front of the interface then allow you to fine-tune the settings required.

Worth a special mention is the EQ, which has a super-imposed frequency analyser.

Sharpest tool in the shed

Aside from the aforementioned EQ, the controls are divided into Tools and Enhance rows. The Tools one offers De-Esser threshold; Breath target; Gate threshold; and the scale, root note and speed of the Pitch Correction module.

Most of these properties are likely to need adjusting at least slightly to suit your source recording, but it actually feels liberating to have all of those controls so close together in one space.

To take things further, there's an advanced view that exposes the full controls for all of Nectar's 11 internal modules. The first two in the chain are Pitch and Breath Control, which are logically hardwired in their positions, while the other nine modules can be moved freely to reroute the signal as you desire.

It might seem daunting to have command over 11 modules in the advanced view, but as the presets demonstrate, it's not necessary to have all of them active at once - you can just select the ones you need for a particular job.

So, how does it sound? Well, we tested all of the modules extensively, and all of them impressed us. These are all exceptional tools in their own right. For instance, the Compressors module actually houses two compressors that can work in parallel.

That means you can compress the hell out of your vocal and mix the results with a more pristine version for a tight, controlled sound that retains the fidelity of the original recording. There's even a filter on the second compressor that's perfect for dialling in an 'excited' sound to mix in via the parallel approach.

To have the power of this kind of advanced routing in a single plug-in is a serious blessing. Users of iZotope's Alloy (and indeed, Ozone) will be familiar with this degree of flexibility, but of course, Nectar's modules are angled towards vocal processing.

For example, the compressors have more modes. Whereas Alloy offered Digital and Vintage options, Nectar also sports Optical and Solid-State varieties, which represent classic compressor types that sound awesome on vocals. And like Alloy and Ozone, you get peak and RMS detection modes.

It's surprising just how in-depth the individual modules are - many could be plug-ins in their own right!

Back to the main interface, and beneath the Tools row of controls is the Enhance set, which includes Levels (Preamp and Loudness), Space (Wet/Dry, Size and Colour) and a customisable control that's particular to the preset.

Even if you decide to dive deep into fine-tuning the modules in the Advanced view, you can still emerge from the depths and call up the basic interface to make quick adjustments. There's also iZotope's history-based undo system - very slick!

We'd imagine many people are going to be interested in Nectar purely for the Pitch module. It's a really cool feature, especially considering Nectar's price point and everything else it can do.

We found that the automatic style of correction worked quickly and well enough to get us into the right ballpark most of the time: it's as simple as selecting the correct key and adjusting the correction speed.

However, the manual pitch correction is where Nectar truly shines. If you want further control over the intonation, the workflow is a little more involved.

When you're happy with the position of the audio in your arrangement, click the Capture button make Nectar analyse the incoming audio. As it does this, the GUI updates and displays the waveform plus the tuning information. Then you're free to make detailed adjustments to the pitch, much like Celemony's Melodyne.

We immediately appreciated the Split and Merge tools because the detection of where one note ends and the next begins can make all the difference to the quality of the results.

Naturally, there are certain scenarios where you're going to require a low-latency response - for instance, when monitoring vocals through the plug-in. As well as its default Mixing mode, Nectar has a Tracking mode that minimises latency.

The drawbacks are reduced functionality of the Pitch module, lower quality algorithms for the Doubler and Limiter modules, and disabling of the Breath Control module. All of which are entirely acceptable compromises.

Nectar is hard to knock. It's likely to become the go-to vocal processor for many. We did try it on other types of material, but concluded that it wouldn't get so much use outside of processing vocals - there are more suitable tools for that.

For its intended purpose, though, it's invaluable, and when you consider how much you might have to spend to get the same functionality from other plug-ins, it's a good deal too.

Now listen to our audio demos to hear how Nectar sounds: