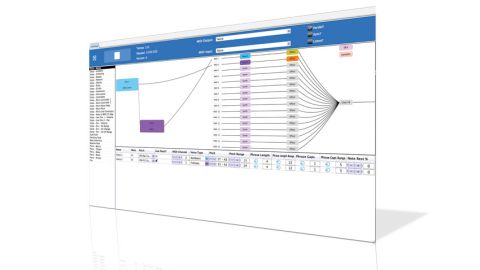 If melodic inspiration's what you need, Noatikl's generative wizardry can help - now with added sound generation!

Intermorphic has been pumping out algorithmic composition tools for years now. Mixtikl generates mixes and Liptikl generates lyrics based on your input. However, Noatikl (VST/AU and separately available standalone version) is the coup de grace in the fight against creative block, cobbling up actual musical progressions based on rules that you define.

Noatikl provides a vast number of parameters to set up - if you can be bothered. There are plenty of templates that'll do the job without any legwork, or at least make for good jumping-off points, and this is made all the easier by Noatikl's version 2 sprucing-up.

A modular-style graphical interface fills most of the main view. This is where the various 'Voices' of the project are shown and routed to 16 MIDI channels via virtual cables. A Voice is not a sound - it determines the notes generated and how they should be played. Voices can also be routed into one another to create 'Follow/Repeat' Voice networks, wherein one Voice reacts to the data generated by another.

In the past, Noatikl's Voices were routed to MIDI outputs. Now it offers serious built-in tone generation via Intermorphic's Partikl modular synthesis, sampling and MIDI environment. Some of its functions will be familiar to owners of Mixtikl, but the full range of Partikl functions are available only through Noatikl.

The inclusion of Partikl means a number of changes, the biggest being that MIDI hardware is now an option rather than a requirement. It also means that the plug-in version generates audio as well as MIDI data. Additionally - and very much at the forefront of Intermorphic's thinking - it makes for an easy, data-friendly way to share your work with other Noatikl and Mixtikl users. Partikl files can even be Tweeted.

The left section of the interface enables you to select one of the many Noatikl Objects or parameters to edit. These Objects and settings will be familiar to users of previous versions. You can set up scripts, articulations, controllers and much, much more - anything that could have a bearing on the resultant arrangement. You tell Noatikl what you want randomised, and by how much.

It would take us page upon page to convey the wealth of goodies found in Noatikl 2. While we don't have quite that amount of space, we can confirm that the improvements over the previous version are significant. The new GUI is far easier to get around. There are still some quirks - you can't quit the program without closing the project first, for example.

In addition, the Partikl editors look very much like they were designed for tablets and phones, and the complicated system of setting up 'rules' or scripts means that only the most dedicated user will get the most out of it. Also, depending on your host, using Noatikl as a plug-in can take a bit of setting up.

Nevertheless, even a first-timer can launch it, make a few adjustments and find inspiration. It won't do the work for you (that's a good thing!), but rather, it will work with you. You'll get as good as you give, and then some.