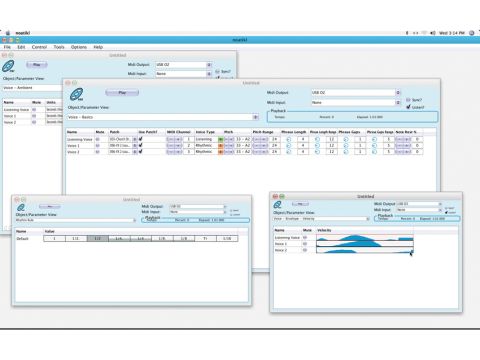 Generative music is still a niche area, but if it is your thing, noatikl is one of the most flexible and usable options available.

Back in the days of the Amiga and Atari ST, algorithmic compositional software was everywhere. Companies like Intelligent Music and Dr T's Music Software treated computer musicians to 'intelligent' tools that enabled them to define a specific set of parameters and limitations, and then sit back as the code wrought forth musical idea after musical idea.

More often than not, the results were entertaining, if esoteric; occasionally, they were magical.

Times have changed, and algorithmic tools are scarce, fighting for survival in a DAW-eat-DAW industry. Still some endure though, such as SSEYO Koan; embraced by Brian Eno (who cut an entire record with the thing), it left a lasting impression.

Two of the minds behind that particular bit of code have returned with a new company, intermorphic, and a pair of new products, one of which, noatikl (pronounced 'noh-tickle'), picks up where Captain Eno's beloved Koan left off (intermorphic's other app is the generative lyric program liptikl).

noatikl is a cross-platform 'instrument' that can be used as a VST or AU plug-in. There's also a standalone version that can be slaved to sequencers that don't support either of those formats, such as Pro Tools.

The non-commercial licence ($99) is for one platform and one format only (ie, Windows standalone, or Mac VSTi, etc), but for $189 you can get a commercial licence and the 'suite' for your chosen platform, containing all the plug-in formats and the standalone version.

Like most algorithmic composition programs, you can set noatikl up and then kick back while it does its thing, generating a stream of notes on various MIDI channels to be played back by your favourite synths, samplers and drum machines. You can record, capture and edit bits you like for further use, or simply let it meander on all by its own.

However, the real power of the application lies in the way it allows you to take a certain amount of control over the proceedings. noatikl offers the user the ability to define note ranges, rhythmic intervals and all the usual sorts of things one would expect, and quite a bit more besides.

As you can see, noatikl isn't about flashiness. The interface is plain and as simple to use as one could hope for.

You set up the most elementary functions on the Basics screen. You can configure how many voices you'll be using and which specific MIDI channels they'll control. You can also define the base notes and note ranges for Voices, along with phrase length and range and the Note Rest percentage.

Perhaps most importantly, you'll also find the Voice Type setting. This is where you tell noatikl whether a voice should be Rhythmic in nature; Ambient; a Fixed Pattern; if it should Repeat its previous output; or whether it Follows another voice, which is a little like 'call and response'.

It all looks straightforward - and even sparse - until you realise that this is but a single view. Tucked away beneath the Object/Parameter menu are a host of views pertaining to specific aspects of the program.

For instance, you can set the velocity ranges to be used for each voice, or take command of the harmonic and melodic content that will be generated. You can also edit the particular attributes of each of those Voice Types.

There are over two dozen views on offer, each with its own tools for each and every voice here. Suffice to say, the level of control is deep and extensive.

While generative music can be fun and inspiring, one of noatikl's most useful features is its ability to generate MIDI Continuous Controller data. With a little creative thinking (and a bit of patching in your host), you can use noatikl to control almost any function of any instrument or effect with a MIDI input.

In fact, you can do even more than this: Logic users, for example can tap into the Environment to tie noatikl to any available parameter: mix volumes, send levels - anything is fair game. Want to generate a dynamic, algorithmic mix of an otherwise meticulously composed piece? Here's your chance!

Speaking of host programs, noatikl is a perfectly compliant partner. You can sync it to your DAW's tempo or even control the tempo algorithmically. Setting it up to work with your chosen program might take some doing, but intermorphic provides a good online manual and a slew of video tutorials to get you going. Standalone users may need to use a virtual MIDI router such as MIDIYoke or MidiPipe.

As we've suggested, algorithmic compositional tools can produce mixed results. While often applied to avant-garde styles, there's no reason at all why you can't use them to knock out a few ideas for your next dance smash or raw rocker. Whether you're looking for unpredictability and chaos in your music, or are simply seeking a fresh source of inspiration, that killer hook could very well spring forth from noatikl's musical stream. And of course, ambient musicians will eat it up.

We've always been fascinated by generative applications, and noatikl is one of the most comprehensive we've seen. What's more, the results were always intriguing and, more importantly, musical.

While we might not be inclined to let it write our music for us, it is a superb resource for ideas, and a sure-ire cure for writer's block. Control freaks who like to niggle over every single hi-hat hit might be put off, but those with an open mind may find noatikl to be their ideal collaborator.

Take a listen to what noatikl can do: