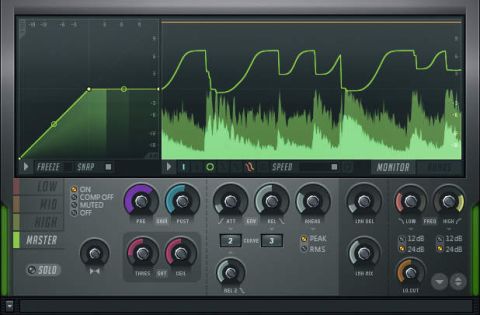 Maximus´s modern approach to multiband compression means that it´s capable of any dynamics task - and more besides - whilst remaining as easy to use as one could hope. And it sounds great too!

Maximus is a VST and FL Studio plug-in for PC that Image-Line claims will compete with the most heavyweight of dynamics processors and mastering tools on the market.

The basic need for so-called 'maximising' effects such as Maximus is rooted in the loudness war that everybody seems to be banging on about these days. The gist of this is that, in a vicious tail-chasing circle, commercial releases have become louder and louder over the years, at the expense of clarity, audio fidelity and dynamic range.

However, Image-Line is making it quite clear that Maximus is designed to minimise these unwanted side effects while still pushing perceived loudness to competitive levels.

Maximus is a multiband affair, and so is capable of splitting the incoming signal into three frequency bands: Low, Mid, and High. Each band can then be processed separately, using its own dynamics settings, before being reunited at the next stage - the Master band - for a further dose of dynamic manipulation.

The theory is that it's easier to achieve a louder overall sound if each band has been processed independently. Otherwise, the danger is that imbalanced frequency distribution will compromise the overall level - if a heavy bass part gobbles up all the headroom, for example.

On the face of it, Maximus is simply a multiband compressor, but it quickly becomes clear that mere compression barely scratches the surface of this beast's capabilities. Rather than using the typical threshold and ratio dials (as found on classic compression units and the vast majority of software incarnations), Maximus makes use of a highly flexible curve-based architecture.

The dynamics curve is basically a graph representing input level versus output level. To clarify how this works, a straight 45 degree line (ie, a 1:1 incline) would represent no change at all, as all input levels (X axis) map to the same output levels (Y axis).

Curves consist of control points, and you can add as many as you like, with tension handles for each curve section being used to further pull them into shape. There are five different curve types available to join the control points: a standard single curve, an S-shaped double curve, hold (ie, a horizontal line), stairs, and smooth stairs.

The flexibility afforded by Maximus's dynamics curves is nigh-on infinite, and when you couple this with the fact that each of the four bands has its own curve, you'll start to understand why we salivate at the possibilities.

Maximus can handle any dynamic application, including soft- or hard-knee compression, limiting, noise gating, distortion and even inversion, which is an intriguing effect where loud equals quiet and quiet equals loud.

Maximus is also able to function as an incredibly powerful de-esser, and can even produce unique special effects.

To enhance the usability of what could potentially be a hard system to get a handle on, a display monitor gives a configurable visual representation of the incoming waveform and the processing for each band. FabFilter's Pro-C compressor uses a strikingly similar visualisation system, and, as with that product, the displays on Maximus certainly make for a fun and easy route to dynamic mastery.

You can even set the speed at which the display rolls by, or pause it with a click of the mouse. Obviously, this doesn't quite circumvent the need to learn how to use compression, and it can also be overwhelming at first, but once you've sussed it out, the ability to actually see the differences made by tweaking the settings becomes highly useful.

All this power and flexibility would be of little consequence if Maximus didn't deliver the goods sonically, but it certainly didn't let us down, no matter what task we turned it to.

We do have a few criticisms, though: we found the GUI to be a bit murky and hard to read, and we also reckon that some of the controls on offer - such as the advanced parameters for tweaking the attack and release curves - are a bit too highbrow and likely to confuse all but the most compression-crazed dynamics junkies.

Also, while having just three frequency bands makes things easier to get a grip on, many modern multiband compressors have four or five bands, so some may find Maximus lacking in this area.

Even so, you won't find another dynamics processor quite like Maximus. It's a supremely configurable tool that sounds as good as it looks.