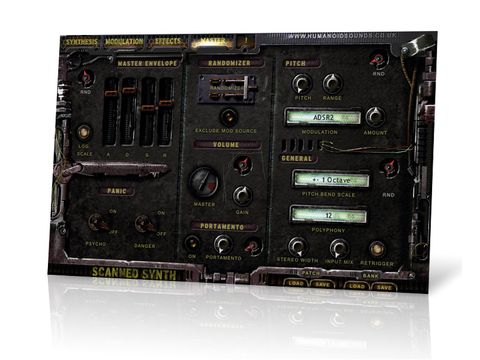 A real improvement over v1. While this won't replace your existing synths, it could be a great complementary addition to your rig.

Around ten years old now, scanned synthesis is a potent technology that has yet to be fully adopted by music software developers. There are but a handful of scanned synthesis applications out there, and all of them - with the notable exception of Scanned Synth Pro - are more like 'proof of concept' sonic workshops than bona fide musical instruments.

The first version of Scanned Synth Pro contained some intriguing scanned synthesis technology but wasn't especially musical (it certainly had some cacophonous presets). Now v2 is here, and Humanoid reckons it's a big step up.

Most digital synthesizers (virtual analogues notwithstanding) use static waveforms and modulation to 'animate' the sound. For instance, wavetable synthesis might use an LFO to cycle through waveforms.

In the late 90s, Bill Verplank, Rob Shaw, and Max Mathews invented scanned synthesis, which doesn't use hard-coded waveforms, but instead employs an evolving 'system' that's sampled to produce a wave shape that constantly mutates.

The simplest model used is that of a series of nodes connected by springs and arranged in a loop - when the nodes are struck with a virtual 'hammer', the whole structure oscillates, at a very low, inaudible frequency, typically around 15Hz. To create audible sound, the nodes are read quickly, one after the other - faster scanning results in higher pitches.

The simulation model used in Scanned Synth Pro 2 is of the vibrating string variety, using a set of spring-connected nodes of different masses. The user parameters available are: hammer, update rate, centre wave, centre force scale, mass, and the mind-boggling array of topologies on offer via the connection matrix. These aren't exactly intuitive, but luckily, there's a new context-sensitive pop-up help system, which is most welcome and genuinely useful.

SSP 2 features a revamped GUI with a cool, crusty, retro-futuristic skin. This complements the kind of edgy, digital tones it spits out, not to mention the experimental nature of working with scanned synthesis.

There's also an effects version with an audio input that can exert its influence over the hammer and mass shapes, and an envelope follower that tracks the audio for modulating the synth's parameters. Notably, the former can produce unusual, vocoder-esque tones.

Those who missed the dirty sounds of the original, pre-Pro plug-in (Scanned Synth VST) can access such tones via the new Danger switch. Additionally, there are buttons to load and save presets through drop-down menus, and internal smoothing of some elements of the synth. However, it's annoying that the name of the current patch is not displayed, and that there's no way to quickly step through the presets.

There are plenty of virtual analogue synths and ROMplers around, so SSP's unusual sound and style are prime selling points. The tones produced can be icily digital, consonant, dissonant, familiar, or even unearthly.

While the synth can be unwieldy, the context-sensitive help is a boon, and the much-improved presets of v2 are far more inspiring and should prove serve as starting points for your own explorations.

Take a listen to Scanned Synth Pro 2 in action: