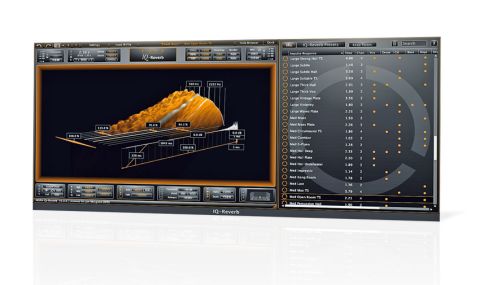 HOFA Plugins is the software development offshoot of Germany's HOFA Studios and Audio College, and IQ-Reverb (AU/VST/RTAS/ AAX) follows in the footsteps of its other "IQ" plugins: IQ-EQ, IQ-Comp and IQ-Analyser.

It's a convolution reverb with a vintage twist in the form of algorithmic reverb features such as LFO modulation, gating and EQ, separate level control for the direct signal, early reflections and tail, and predelay settings. The convolution options include impulse response timestretch (20-500%) and IR import.

The scalable GUI is dominated by a 3D IR spectrogram (see Depth of field), and many parameters (reverb time, EQ, element mix levels, etc) can be adjusted both there and in the parameter boxes at the top and bottom.

Further options include IR reverse, IR damping, input crosstalk for blending the left/right signals, and IR length trim with fade time. IQ-Reverb also includes a Position control for placement of the source signal (left to right and front to back), as well as an onboard test signal player for auditioning, with 26 sounds to choose from.

Perhaps more than anything, convolution reverbs are all about their libraries, and IQ-Reverb's comprises 135 impulse responses and 95 presets. Some of the IRs are True Stereo (we counted 24) and the presets make good use of the algorithmic parameters.

Presets and impulse responses are accessed via a pretty decent categorised browser (Drums, Vox and so on) that lists time and channel count (Stereo or True Stereo) for each IR. The browser can also be floated as a window, and the parameter columns can be reordered for easy sorting.

Impulses range in length from 0.16 seconds to 29.9 seconds and are labelled descriptively, rather than by source. On drums, we particularly liked 'Small Rock' and 'Gated Boxy', while 'Ambi Snare' does exactly what it says, adding tight, almost invisible space to percussive sounds. Some of the larger IRs, such as 'Large Club Exiting', are beautifully rich, and two of the True Stereo ones - 'Med Max' and 'Large Open' - are particularly broad and spacious.

As you'd expect, the presets tend to be more coloured than the straight IRs - for example, 'Chorused Eko Ambience' and 'Fatter Cut' each deliver different degrees of wobbly reverb. Then there are some huge, shimmering spaces, such as 'Krishna Mantra' with its 25-second reverb time. Frustratingly, load times increase with IR size, and the longer ones are pretty sluggish.

Back on the upside, the browser includes a 'Keep parameters' option, allowing you to switch IR but retain all modified parameters, including impulse stretch and damping. Importing any third-party impulses you may have downloaded is also straightforward.

Finally, the aforementioned Position control works best when using IQ-Reverb as an insert, and also offers independent control of left and right inputs, allowing for more creative effects than you would get by positioning them as one.

IQ-Reverb is excellent, boasting a very similar feature set to Audio Ease's Altiverb, but without such an extensive library. It's also stereo-only, though surround capabilities might be added at a later date. Even without them, though, this is a fantastic pro reverb at a great price, and its 'traditional' parameters - in particular, control over the separate reverb stages and predelays - add flexibility and familiarity.