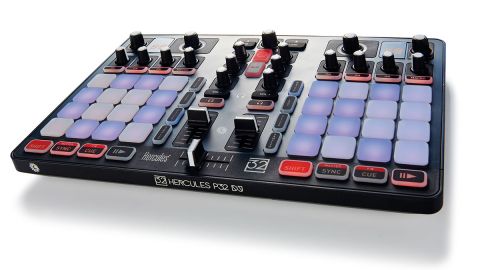 Not a serious pro option but nevertheless a fun product that offer plenty to beginners and occasional performers.

The last time we got our hands on a bit of Hercules kit it was their Control Steel, and the year was 2009.

A lot has changed in DJing since then. CDs have all but disappeared (with vinyl coming back), syncing has become almost as ubiquitous as it is reviled, NI's Stems are trying to gain enough, ahem, 'Traktion' to become an industry standard, but most importantly the shift has very much gone from simply playing two tracks together to finally delivering those bona fide 'performance' sets that our booking agents have been (mostly) bullshitting promoters about since the 90s. And it's this market the P32 DJ is designed to cater for.

There are two components to the package, the hardware controller/audio interface and the latest DJUCED 40 software. Essentially it's a four deck affair with two of those serving as remix decks.

Everything is responsive and well laid out, albeit a little unsexy to look at, and integration with the hardware is tight. Critically, almost everything (except settings and a few calibration/modification settings) can be handled via the hardware, so the GUI just has to look clear enough, which it does!

The hardware is a USB-powered MIDI control mixer and audio interface with dual 16-pad trigger sections. It's billed as four-channel, which is a fancy way of saying there's a stereo phono output and a 1/4" stereo headphone jack (no no inputs at all) which clearly marks P32 out as entry-level, on a technical level at least.

The two-channel mixer section offers useful key controls - channel faders, crossfader, monitoring controls, three band EQ and browser (via buttons and a push-button rotary) and a large Record button - but it's a little basic. Push buttons for headphone monitoring volume and no master volume control make this a much less viable crowd-facing option.

The DJ-deck performance controls are a bit better, with both channels offering three assignable effects (with on/off buttons), dry/wet dial and Macro options. There's also a push button looper rotary with an old-style LED readout and a push button rotary for channel filtering.

This all works nicely and is almost as functional as my NI X2 controller. At the bottom of each channel there are also transport controls (Sync, Play, Cue etc.) and a Shift button offering DJUCED-users access to a number of multi-function controls including, perhaps most importantly, the fact that when held, all channel mixer controls for A and B instead control C and D, respectively.

One thing we do like is that there's no space (or budget) wasted on jog-wheels. It's a contentious position but we count myself among the 'With auto-syncing, what's the point of jog-wheels unless they are big enough and sensitive to scratch properly with?' camp.

So what takes up all the free space on the P32 DJ? Why, it's those large and pretty-looking pad-matrices! They feel fairly loose and rubbery to the touch which is rather nice (stop that sniggering at the back... ) and as they are simple triggers without velocity sensitivity it doesn't affect performance (seriously, get your head out of the gutter). They are multi-colour backlit, and a nice size allowing very comfortable hands-on control.

Loop splits the pads into two groups, the top acting as momentary looping triggers and the bottom as on/off toggles for the corresponding values (both from 1/16ths to eight beats). Slicer automatically slices up a section of your track and assigns slices to pads, allowing user-definable length values (from 1/32 per pad up to 1 bar per slice. A Slip mode button can keep your track playing in the background while playing with both.

The fourth mode, Sampler, is used for triggering up to 16 sampled loops (up to four each each for decks C and D) and automatically snaps the launch to the nearest beat (braver users can assign launch quantise values down to 1/32 notes).

It's not as powerful as something like Akai's APC40mkII and Live, which allows you to assign launch timings up to eight bars on the fly (direct from the hardware), but it will at least stop your beats from clattering mercilessly because you accidentally hit the button on the off-beat!

There's a fair bit to recommend to P32 for the home user and occasional performer. In particular we really like the pad functions and layouts - they are definitely the highlight of the whole package for us and make us wish the hardware was a little better specified and generally more rugged.

That could have been a real tempter. Truthfully, though, there's not quite enough enough to lure us away from our higher end performance kit, such as Push, APC40 and Launchpad Pro for the live performance and NI's series of Traktor controllers and mixers for performance DJing.

There has been some talk on t'internet about the lack of touch-strips and pitch-faders, but for us it ultimately comes down to the hardware. In addition to the lower-spec audio interface, the build quality, though solid for the price, doesn't convince us we'd still be touring this kit in 10 years.

However, if you are just starting out and planning a few gigs on a budget, or if you simply want to try something different to mix up your performances then you could definitely add P32 DJ to the shortlist of candidates.