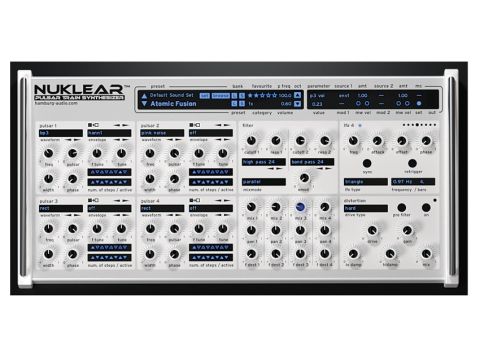 Nuklear is imperfect, but within its self-defined remit, it can produce some fantastic, ear-catching sounds.

We love innovation here at - after all, where would computer music be without it? We particularly like to see new things happening in the world of soft synths, purely for the reason that it's not often we get one that requires us to sit down, pull out our reading glasses and put the phone on silent.

Finger on the pulse

So how do pulsar oscillators differ from typical ones? Well, instead of using 'looping' waveforms such as sine, saw, square, etc, played at different pitches, they use individual pulses of varying shapes repeated at slower or faster rates.

To get an idea of how this works, use your wave editor to make a sample consisting of a super-short sound (ideally a single cycle snipped from a waveform) followed by silence of, say, a second.

Put that sample in a sampler and loop it, and you should hear a "blip… blip… blip…" sound. If you gradually reduce the loop length, you'll hear how the 'blips' eventually repeat so fast that they create a solid tone, with the loop length dictating pitch - shorter lengths give higher pitches.

Pulsar synthesis uses this concept of repeating a fixed-length pulse at varying intervals to produce a pitched tone. Unlike basic sample looping, though, each pulse plays in its entirety, potentially overlapping with the previous and subsequent pulses.

Nuklear's pulsar synthesis makes possible novel features such as alternating the panning of pulses to create a super-wide sound; and omitting certain pulses, which gives rise to sub-harmonics.

There are four oscillators termed pulsar trains. Each has a Pulsar knob; when set to zero, it causes the pulses to be 'stretched' so that the results are just like normal synth oscillators.

The maximum setting results in 'pure' pulsar synthesis, while intermediate values give something in between the two. Further knobs include Freq, which sets the length of the pulse (it adjusts the resultant timbre, not the pitch); Width, which pans alternate pulses left and right (when set to zero, the results are mono); and Phase, which offsets every other pulse, producing a tonal shift.

The filters are much more traditional and offer few surprises, with low-, band- and high pass in 12 and 24dB/octave flavours available. They can be used in parallel or series.

For modulation, there are eight ADSHR envelopes with curve controls for the attack, decay and release. Eight LFOs share the same GUI space - clicking the panel label toggles between them. Here you get four waveshapes and Sync, Phase, Offset and Retrigger controls.

Effects-wise, Nuklear only provides delay and distortion, but this is fine with us as these effects marry well with the sequencer. Indeed, these all cohabit the same corner of the front panel, again requiring a click of the panel header to cycle through the three sections.

Experienced users won't mind the GUI being primarily based on knobs and values, but beginners might have preferred a graphic representation of things like the envelope, and we feel that it wouldn't have hurt to add one to the top right display window while actively editing it.

The same thing goes for the actual pulsar trains - an oscilloscope-style view would help enormously in understanding what the synth actually does. In fact, there are a number of parameters here that could benefit from visual representation.

With any unusual kind of synthesis, it's vital to pack in plenty of demonstrative presets, and Nuklear hits the target here. It offers up a fantastic selection ranging from leads and basses to bizarre noises, without ever being too self-indulgent.

Many make use of the sequencer (16 steps with eight MIDI-selectable patterns) and so are incredibly inspirational. It's like having a crazy German synth genius in the studio with you - you might not want to deal with them every day, but they sure do get the ball rolling!

That said, sonically, Nuklear isn't the most versatile synth in the world. Its results can be incredibly distinctive, with lots of character, but they're not 'large'. The nature of the synth is great for generating powerful stereo sounds, but not so great at pumping out warm tones.

It's great for soundtrack, dance-pop, dubstep and other digital-sounding synth-driven genres, but you wouldn't want it as your only synth.

We aren't completely convinced about the ergonomics. While the general layout is good and some multipurpose sections offer a nice trade-off between usability and space, the actual interaction and controls can be fiddly sometimes.

For example, with something as simple as the favourites system, you can't award a preset five stars by clicking on the fifth star - you have to click in the star area and move the mouse up or down.

There are a few more instances like this - when selecting one of the six LFOs or eight sequences, you have to click a tiny, unnumbered black dot.

The modulation system is fiddly, since it seems there's no overview of all modulation taking place - frustrating when you're trying to figure out how a patch works, or disable some unwanted LFO wobble, etc. Some basic functions like glide time are even tucked away in a Settings menu, which we find very odd.

We also think that while Nuklear's manual is descriptive enough, it's not really explanatory. Aside from a brief and not wholly clear section on pulsar synthesis, there is no real explanation about how the different sections affect the sound or any suggestions on how you can use them.

We think that there should be a walkthrough in the manual showing how a patch is put together, so that people can get a sense for what does what, how and why.

On the sonic front, the first version we tried had audible aliasing artifacts, but hamburg-audio fixed this within days of us reporting the issue, resulting in a much clearer, crisper tone.

Despite our criticisms, nothing takes away from the fact that Nuklear is a fine addition to your sonic armoury. It has a few niggles we'd like to see ironed out, it could be clearer and easier to program, and its distinctive sound means that it won't be everybody's cup of tea. Still, the sounds it does do well are its unique selling point.

It has a fresh sound that lends itself to many modern styles and allows it to stand out in a mix. Its sequencer is pretty inspirational, and the presets provide a good starting point for learning to program the synth or to simply start making a new track.

In a market full of generic subtractive analogue emulations, we need more synths like Nuklear.