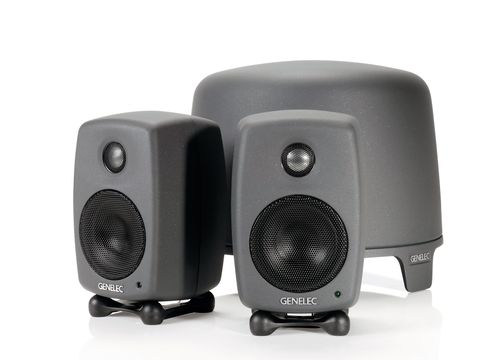 They may be small but the 6010As pack an impressive punch and could be perfect for your project studio.

If you're familiar with the sleek, curved design of the current Genelec range, you'll recognise the 6010A immediately. Like many of its larger siblings, it's available in dark grey and pristine white finishes.

Connections-wise, you'll find a break from Genelec tradition, in that audio inputs to these speakers (they come as a pair, by the way) are unbalanced RCA connectors, with a stereo mini-jack to RCA 'Y-cable' in each box. As space is limited, the power inlet is also a narrower affair than the more traditional 'kettle' socket.

Otherwise, as these are fully active monitors, you'll find a gain dial on the back which you'll need a carefully trained fingernail or small screwdriver to adjust. There are also switches to compensate for wall or corner proximity (the 'baffle step' effect), for which Genelec provides recommended settings.

These speakers are much louder than we thought they'd be. At a 1m distance, Genelec claims a maximum output level over 102dB, which isn't bad for a pair of monitors that stands considerably shorter than the screen on our 15-inch laptop.

The 6010As feature twin 12W amplifiers, which feed the bass and treble drivers respectively. These are individually tested to provide balanced listening, and we have to say that the integration is as tight here as on any other Genelec monitor we've heard.

So, how compromised is the bass? Again, not as much as you'd think. Frequency response for these guys is 74Hz to 18kHz, which might be enough in its own right for some of the applications for which the 6010A is best suited (namely, multimedia and home surround monitoring systems).

For those requiring the extra bass extension, integration with Genelec's own 5040A subwoofer (pictured above) is seamless. One of these was kindly given to us for the review period and we were impressed by the lack of a sonic 'gap' between top and bottom.

So, who are these monitors for? We can think of several uses. They make a great, genuinely portable pair of speakers for the travelling recorder who needs location playback. They're also perfect for multimedia composers who need high-quality, desktop-based audio in a small space.

For those putting a home cinema surround system together, they need to be seriously considered too and, for small project studios, they'd actually make perfectly reasonable main monitors, particularly when integrated with the sub unit.

If any of these scenarios sound like your own, best get yourself to a dealer.