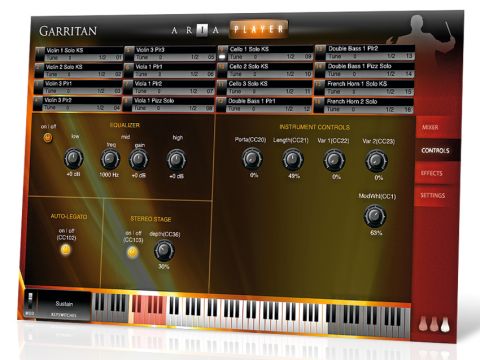 It's been over five years since the first edition of the Garritan Personal Orchestra. In the intervening time, the rather clunky shift to Kontakt Player 2 (and Universal Binary support) caused much frustration for users - and for Garritan, too, no doubt. That's all changed now, though, as v4 features Garritan's own sample playback engine, Aria.

The library has been expanded to include extra brass from Project SAM, extended ranges on some sounds, and new choir and ensemble patches. You'll also find a new auto legato mode joining the other performance features, on which more later.

GPO4 includes about 2GB of samples and patches, with over 150 presets organised in orchestral fashion (woodwind, choir, brass, strings, string sections, percussion, keyboards and harps). It offers both solo and ensemble patches and, for the strings, additional full orchestral sections. All standard orchestral instruments are included, with some nice extras, including concert grand piano and pipe organ.

GPO4 is all arranged over four pages (Mixer, Controls, Effects and Settings), with the instruments and keyboard visible at all times. Overall, it's easy to use, with its text readouts and colour-coding for keyswitching. For us, the only things missing are audio and MIDI meters (we understand a future update will add these). MIDI controller options vary across patches and the CCs used are consistent albeit fixed, so you'll have to map your controller to suit.

Although GPO4 is sonically similar to its predecessor, the new reverb is pretty flexible (with 12 algorithm presets and eight adjustable parameters), plus with per-instrument EQ, you can achieve much more within the interface. The new stereo stage effect also enables you to add depth without losing panning information.

"All standard orchestral instruments are included, with some nice extras, including concert grand piano and pipe organ."

But to really get inside this instrument, you have to use the performance controls - the sustain, velocity and mod wheel have an enormous impact on the results, and if you're a reasonable player, you can compose or program quickly whilst achieving the required realism.

For legato instruments (strings, brass and woodwind), the mod wheel controls volume and timbre, velocity affects attack, and the sustain pedal enables legato mode for smooth transitions. The legato sounds have adjustable portamento time and controls for automatic pitch and timbre variation. Some patches also offer vibrato speed and intensity controls, with an Aggressive parameter for some brass and strings.

Non-legato instruments have fewer controls and percussion instruments, and keyboards tend to follow more typical MIDI assignments, with velocity controlling level and sustain controlling, well, sustain. Of the keyswitching instruments, the strings impressed us most due to their many articulations. We were also taken with the clever trills implementation that uses note-off data to trigger the shift.

On the face of it, GPO4 hasn't changed that much from its predecessor. But it now has the bespoke interface it's always deserved and is more affordable than ever. In terms of detail and playing styles, it certainly doesn't compete with high-end libraries, but it's not trying to. Instead, it offers a quick interface with great playability that's easy to transport, and in that respect it remains the best package of its kind.