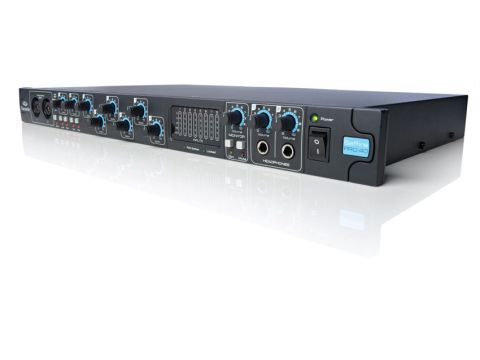 The Saffire Pro 40 boasts a fine sound and solid features, and the keen price point gives it an edge on the competition.

The Saffire Pro 40 is a rackmountable FireWire audio interface powered via an IEC cable.

There are eight analogue ins on combo connectors (mic or line, XLR or balanced/unbalanced jack) with LED meters and gain pots. Phantom power is switchable in banks of four, and two ins have buttons for instrument input and -9dB pad.

As for outs, there are ten of 'em, all line level on 1/4-inch jacks, balanced or unbalanced. The twin headphone sockets mirror the signals at outputs 7/8 and 9/10 and have separate volume knobs.

On the digital side, there's S/PDIF in/out via RCA plugs, and eight channels of ADAT in/out on optical connectors. There's MIDI I/O, too.

The front panel monitor section has a master volume knob, plus Dim and Mute buttons.

The software control panel, Saffire MixControl, enables you to create 16 mono mixes (or eight stereo/combinations thereof). Each has 18 mono channels (or up to 9 stereo) that can come from a hardware input or an out from your DAW.

This is ideal for making monitor mixes for musicians, and you can name channels and mixes, then save the lot for total recall.

In the routing area, you determine which signal appears at which physical output: it could be a DAW output, a mix, or an input

Putting the Saffire Pro 40 into action, the sound quality is immediately impressive. Like a number of other companies' interfaces, this one uses the JetPLL jitter-reduction technology, which we've praised before.

The Pro 40 has tight bass and snappy dynamics, and it's free of the graininess that interfaces at the more a­ffordable end of the market can exhibit. The headphone outs sound great and are plenty loud enough.

The mic pres are clean and clear, as you'd expect from Focusrite. As for stability, as long as we launched the MixControl app before our DAW, it was all plain sailing. We made an eight-channel multitrack recording with all outputs and 16 mixes active, at 96kHz and 128 samples latency, and operation was glitch-free.

More than one application can use the Pro 40's ASIO drivers at once, with their outputs mixed automatically. There's a useful feature called Loop Back, too, whereby the output from one app can be internally routed to the input of another.

We used this to pipe our media player into Cubase, so that we could listen to it through IK Multimedia's ARC System room correction. Nice.

There are a fair few interfaces like this on the market, but you still have to pick wisely. The Saffire Pro 40 is de­finitely one of the best around, and it has an attractive price, too. The inclusion of the Focusrite Plug-in Suite (worth £50) adds further value to the package.