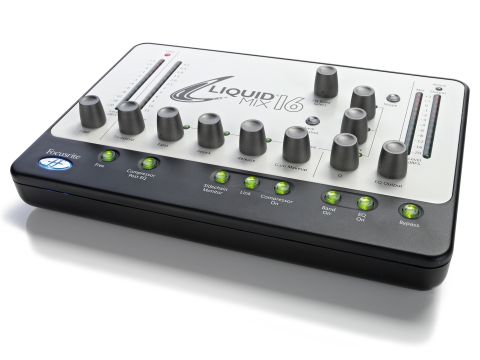 Focusrite's Liquid Mix technology at a knockdown price - what's not to like?

Focusrite's Liquid Mix was originally released in 2006 to wide acclaim. Here was a FireWire-based desktop box, which co-ordinated with a set of plug-ins to unleash a brand new technology: Dynamic Convolution.

In much the same way that convolution reverb provides sampled algorithms of 'real spaces', so dynamic convolution 'samples' and models dynamics and EQ processors to provide a set of tools which can also be applied at will.

This technology is Focusrite's alone and, in Liquid Mix, 40 compressors and 20 EQs were modelled from specific classic mixing desks and outboard hardware.

One of Liquid Mix's most popular elements was its hardware control surface, which allowed tweaking of all important software parameters and even provided visual feedback of its own in the form of a front panel screen.

The subject of this review is Liquid Mix 16 which at first glance looks extremely similar to the original Liquid Mix, save for that screen. So, what else is different?

As standard, half of the processing power is gone. In keeping with its name, Liquid Mix 16 is limited to a standard 16 channels of EQ and compression processing, although this is expandable to 24 via an optional expansion card. That's the bad news.

The good news is that all 40 compression models and all 20 EQs remain from Liquid Mix. So sonically, this box is absolutely a match for its big brother.

And the really good news? All of this is yours for £275, making this the cheapest way possible to get hold of Focusrite's Liquid technology.

Fire up an instance of Liquid Mix in your plug-in chain and you're greeted with a GUI which allows you to choose EQ and compression settings for that channel.

Each of these processes models a specific compressor or EQ via the Dynamic Convolution technology, but rather than simply offering 'copies' of the original gear (which would be great anyway), Liquid Mix allows for 'extended' processing.

In other words, if particular functions such as Attack and Release settings weren't available on the original compression unit in question, Liquid Mix's Free mode enables you to tweak these parameters anyway, effectively meaning that a classic pile of processors gets dragged kicking and screaming into the 21st Century.

Similarly, the EQ algorithms can be applied one band at a time, so if you want the sound of a classic '60s British EQ on the top-end of your mix but want something smoother to round out the lower frequencies, no problem.

You can do exactly this, either by selecting a 'global' EQ across the board or by piecing together a hybrid EQ solution one band at a time.

All of this is achieved courtesy of the relationship between the plug-ins themselves and the hardware unit which controls them, which is where the processing is carried out. This means that your CPU will barely register Liquid Mix's work-rate, ensuring that low latency applications, such as use during tracking, are extremely effective.

Screen absence aside, there's almost nothing to distinguish Liquid Mix 16 from the original Liquid Mix. The same controls flank the unit, with the bottom row of dials mostly dedicated to control of the compression settings while Gain, Frequency and Q dials allow control of the EQ, along with the EQ Band Select button, which cycles through the bands.

If you tend to do all of your compression and EQ tweaks in your DAW with a mouse alone, it's impossible to overstate how wonderful it is to have hardware control instead.

It's great to be able to keep things fresh with alternative compression and EQ models too and, as switching these in and out is so simple, Liquid Mix really encourages a bold, creative approach to work.

While the screen dedicated to showing your compression and EQ settings is gone, the metering remains as before. We've always been a fan of this on Liquid Mix as Focusrite has taken it seriously. Input, output and gain reduction LEDs flank the outer edges and these remain as eye-catching and useful as ever.

There's no disputing the quality of Liquid Mix. Its compressor and EQ tools sound great and are comprehensive in terms of sonic variety.

The moment we discovered that a stripped-down Liquid Mix was to become available, we assumed that the 'cutting back' would include some of the compressor and EQ types, so we're delighted to discover that this isn't the case.

Instead, if you're pondering a purchase, you've got a simple couple of decisions to make. Firstly, does the absence of a screen bother you and, secondly, can you live with only half of the processing power?

The second question is more significant, as Liquid Mix's software GUI provides all of the visual feedback you need and we prefer to check settings on our monitors than on a separate screen anyway. As for processing power, only you know how involved your mix needs to be.

Whichever Liquid Mix you choose, you won't be disappointed - it's a dynamics and EQ solution that remains a class apart.