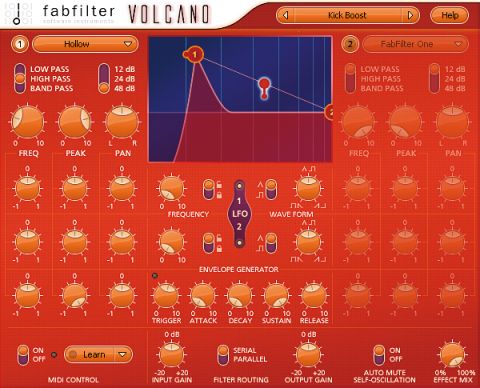 It faces stiff competition, but you can't fail to be impressed by Volcano's sweet sound.

FabFilter's previous effort, Fabfilter One, was a solid demonstration of how good software synthesis has become.

This same filter has been used to create FabFilter's explosive-sounding Volcano.

In fact, this stereo filter effect plug-in contains two of these filters, plus modulation options, an amplitude-triggered envelope generator and a nifty GUI.

So, has that fabulous filter algorithm been given a proper opportunity to shine?

Volcano certainly isn't light on features. There are seven selectable characteristics for each filter - the original FabFilter One mode plus six enhanced processes.

These add varying degrees of distortion and self-oscillation to the signal. All seven filter types offer high-, low- and band-pass modes, with a selectable 18, 24 or 48dB roll-off slope.

The filters can be routed in serial or parallel configurations, and both feature independent pan controls. These enable you to apply varying degrees of filtering to both the left and right channels of a stereo source and create a number of effects.

They range from simple stereo separation and enhancement right up to glass-shattering self-oscillation!

Two tempo-syncable LFOs - sporting triangle and square waveforms but, sadly, no sine - can be routed to the frequency, peak or pan.

There was no option to trigger the EG via MIDI in the Volcano 1.0, but it's been added with version 1.1.

The technology behind FabFilter's filter algorithm is impressive and the six refined filter characteristics in Volcano are testament to the developers' eye for detail.

It's very different from the competition, being remarkably smooth but also capable of some serious sonic mangling. But is this the ultimate filter module?

If you want a more feature-packed filter, PSP Nitro would be the better bet, but for total smoothness, analogue warmth and screaming self-oscillation, you'll struggle to find better than Volcano.