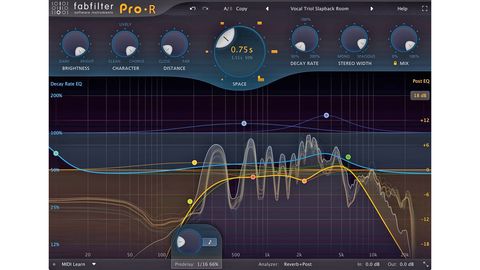 It might sacrifice some depth to achieve functional simplicity, but it works - Pro-R sounds awesome and is hugely enjoyable and rewarding to work with.

Given its propensity for bringing us groovy new spins on workhorse effects, it's quite surprising that FabFilter has taken this long to get around to producing a reverb plugin.

In the shape of Pro-R (VST/AU/AAX) though, here that plugin is, and while it's every bit the FabFilter device in many senses, it also takes an unusually reductive approach in certain areas, which is something that we've not really seen from the Dutch DSP master before.

Pro-R is billed as taking "a musical approach to reverb, offering user-friendly, non-technical controls", but at the same time, and as the price tag makes clear, it's squarely aimed at the professional producer.

The big question, then, is whether or not those professional users are going to be happy having things like early reflection weighting, tail modulation, reverb time and room modelling distilled down to single multipurpose knobs, and how much those knobs sacrifice detail and effectiveness in the name of ease of use. Plus, of course, whether or not it sounds any good...

Pro-R's interface is classic FabFilter, with those immediately recognisable 'fingernailed' knobs, and the vast majority of the space taken up by a colourful edge-to-edge EQ. As is standard with all FabFilter plugins of late, the vector-based GUI can be sized up to Large and Extra Large dimensions, and even made fullscreen, which users of multi-monitor setups will surely appreciate.

Behind the EQ, the spectrum analyser shows the spectrum of the processed output signal, alongside your choice of input signal or decay time, the latter comprising a beautifully animated curve that falls and fades away as the tail decays across the frequency range.

The big, centrally positioned Space knob is Pro-R's most important control, combining the selection of "over a dozen" room models (unnamed but ranging from a closet to a cathedral) with the determination of the base decay time, from 0.2s to 10s. Transitioning from one model to the next is done absolutely seamlessly (which is why we can't tell exactly how many there are), and thanks to the modelling and interpolation going on behind the scenes, the character and density of the late reflections always sound perfectly calibrated to the decay time - in other words, the closet sounds like a closet, and the cathedral sounds like a cathedral!

Working hand in hand with Space, the Decay Rate knob scales the reverb time by anywhere from 50 to 200%, enabling customisation of the decay, and pseudo-detachment of the model and tail length.

Oddly, the Pre-delay setting is a numerical field at the very bottom of the interface that pops out a dial when moused over, with which to establish up to 500ms of separation between the dry signal and the tail. Also oddly - but in an unarguably good way - the Pre-delay is syncable to host tempo, from 1/64 to 2 beats. This immediately feels like something that all reverbs should offer.

State of (the art) Decay

Rather than provide the usual crossover for independent tweaking of low- and high-frequency decay times, Pro-R includes what FabFilter claims to be an industry first: the Decay Rate EQ.

This takes the appearance of a six-band EQ in the main display (the blue one), more than vaguely reminiscent of the Pro-Q 2, but with the defined response curve raising and lowering the decay time across the frequency spectrum, rather than boosting and attenuating the volume level of the signal.

Each band is switchable between high shelf, low shelf, parametric band and notch modes, with the Q widened and narrowed by rolling the mouse wheel, and the Y-axis representing the percentage of the Decay time stated on the Space knob. As intuitive as a regular EQ, the Decay Rate EQ enables supremely smooth, natural-sounding tails to be crafted with ease - we wish there was a global bypass button for it, though.

The orange curve, meanwhile, is the Post EQ - a gain-compensated equaliser for the processed signal. Again, it's got six bands, but the Decay Rate EQ's notch option is replaced by 6-96dB/octave low- and high-pass filters. Very useful indeed.

The Distance knob simulates near/far movement of the listening position relative to the source signal within the modelled space, by influencing the filtering of the early reflections and diffusion of the tail. Next to that, Character is another 'macro' style parameter, governing the modulation of the tail, prominence of early reflections and presence of extra late reflections. From 0-50%, it ramps up subtle modulation and starts to boost the ERs; from 50% up, it heads into gentle chorusing territory.

At the far left, Brightness is a tonal balance control, darkening the sound by shelving higher frequencies down when turned anti clockwise, and brightening it by shelving them up clockwise. Over on the right, the Stereo Width knob transitions the output from mono at 0% through true stereo at 50% and dual mono at 100%, to sides-boosted 'wider than wide' from 101 to 120%. The Mix knob sets the dry/wet balance, and can be locked for consistent preset auditioning.

Sonically, Pro-R is rich and evocative, equally at home generating super-sized Hollywood-style staging as it is airy, intimate vocal treatments. Despite being about as easy to use as a high-end reverb could reasonably be, it doesn't come across as dumbed down.

Indeed, the self-contained but semi-abstract nature of the Space setting is refreshing, smoothly and effortlessly navigating a continuum from a very tiny space to a very big one without the need for supplementary buttons or menus.

Despite their streamlined configuration, the other editables prove comprehensive enough to cover the gamut of traditional (as opposed to 'special FX') reverberations; and the Decay Rate EQ, Post EQ and syncable Predelay are simply brilliant. Obviously, there are deeper, more malleable alternatives out there, but Pro-R is an excellent studio reverb with a sound and flexibility that belie its almost non-existent learning curve.