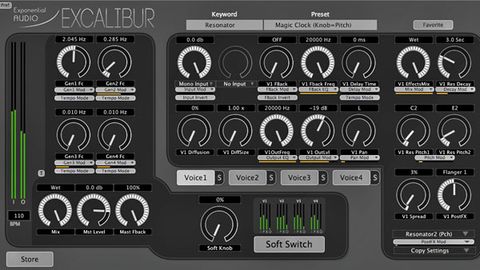 With its new-school take on the old-school multieffects concept, Excalibur is a refreshing effort - and it sounds awesome!

Exponential Audio has so far concentrated its efforts on reverb design, and its only two releases to date, PhoenixVerb and R2, have earned it a solid reputation right off the bat.

This hardly comes as a surprise, however, as Exponential founder and chief designer Michael Carnes spent 25 years working at Lexicon, contributing to such classic devices as the 960L reverb.

For their third outing, the company have broadened their remit and released a multieffects plugin (AU/VST/RTAS/AAX), Excalibur. Without wishing to start on a negative, traditional multieffects plugins have never really taken hold with DAW users, with the term more often applied to the sequencer-based likes of Sinevibes Sequential or various of Sugar Bytes' offerings. So, to be clear, Excalibur is very much a traditional multieffects processor, inspired by the great hardware units of old.

The Primary Voice Controls in the centre panel include input assignment, delay time, feedback amount, feedback frequency, diffusion, output EQ, output level and panning. The Voice Effects panel on the right reconfigures to match the loaded effect, while over on the left are the global output options: Mix, Master Level and Master Feedback.

If you haven't realised it already, Excalibur's architecture means you have to use two Voices to create a mono-in/stereo-out or stereo-in/ stereo-out effect.

As we said, Excalibur is highly configurable, a good example being the multitude of input assignments available for each Voice, ranging from simple main input (left, right or combined mono) to various tap-off points in each of the Voices. The real power of the plugin, however, lies in its modulation options, accessed via the menus below the parameter controls.

Floating windows house options and controls for modulator type, amount and so on, and a real-time plot shows the shape of the modulation. Modulator options include LFOs (sine, triangle, ramp and random), as well as audio signals such as inputs and outputs, and Var, which measures input level transient activity.

LFO modulators are also linked to one of the four Generators on the left-hand side, which define their speeds. Modulators can be selected in combination with either the Soft Knob or Soft Switch (there's only one of each), with the Knob influencing modulator amount and the Switch turning modulation on or off.

In addition, the Soft controls can be assigned as sole modulators, and across multiple parameters, where they act a bit like an offset, although still subject to the modulator depth and smoothing parameters.

Excalibur comes with a large categorised preset library, so you can get plenty of mileage out of it without any deep editing at all, and flicking through the presets is a great way to get a feel for what's on offer.

Like classic units such as the Eventide H3000, the vast majority of Excalibur's effects are meant to be quite obvious: reverbs tend to be modulated or dense, rather than natural (Squishy Room), and delays generally sound 'effected' (Henge Warm Vocal Delay).

Once you get used to its decidedly drab interface, Excalibur offers quite a bit of visual feedback. Each Voice has four level meters (input, pre effects, post effects and output), and active modulations are made visible via the little yellow modulation meters below their target parameters. Finally, although the on-screen parameter labelling is a little over-abbreviated, it's not difficult to decode.

One last point of note is Processor Threshold. This enables you to set a minimum input level for processing, and is designed to prevent wasted CPU cycles on inaudible signals. It defaults to -108dB, and although the CPU hit at that level is very reasonable, it can be adjusted to -120dB and -48dB, which users of low- powered machines may find useful.

Excalibur turns out to be a breath of fresh air, reminding us that multieffects can still offer a straightforward, quick route to truly great sounds. But don't be fooled by its apparent simplicity - this is a complex, powerful plugin with plenty of depth for those who choose to go beyond the presets. Excellent stuff.