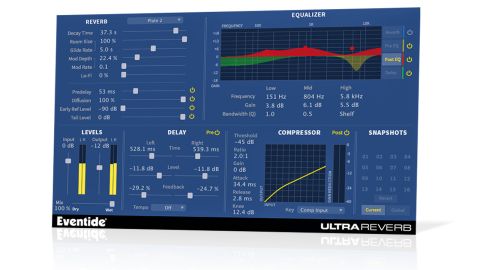 Bring some of that legendary Eventide magic to your tracks with this beautiful sounding and hugely configurable reverb.

Eventide's latest 'Ultra' plugin for native formats (VST/AU/AAX) once again draws heavily on its H8000 UltraHarmonizer. UltraReverb features nine reverb algorithms and over 300 categorised presets, with contributions from Andrew Scheps and Richard X, amongst others.

It also includes Equalizer, Compressor and stereo Delay sections, and a Snapshot system for quick access to 32 alternative settings. The AAX version replaces the Anthology II TDM Reverb plugin for users on non-TDM systems (although there's currently no upgrade discount).

Those who make the switch will notice improvements including the slicker interface, an external compressor sidechain, smoother compression and more flexible signal flow. UltraReverb AAX is also session compatible with the original TDM Anthology II Reverb, so will load in its place in TDM sessions.

The nine algorithms aren't exact copies of H8000 algorithms (there are no actual H8000 patches), but they do share the same underlying code.

The Equalizer is actually made up of four separate EQs: two 3-band fully parametrics for the Pre/Post EQ sections, high and low shelves for the Reverb Tail, and 3-band with parametric mid for the Delay section.

Eventide is renowned for its more 'processed' reverbs, but there's plenty here for conventional usage too. Presets are categorised by algorithm type (Hall, Room, etc) and function (Environments, Instruments, etc).

UltraReverb also includes some good width-enhancing presets, and some with short Delay settings which can deliver useful proximity. Nonetheless, we prefer its medium and large spaces.

As expected, it's an amazing reverb, but there are some niggles. First, the Lo-Fi effect works best at up to 20% - any higher and it starts to kill transients and sound quite unpleasant.

Next, although the Snapshot system is useful, it would be better worked up into a fully fledged Preset/ Snapshot browser/library.

Apart from that, this is an excellent, CPU-efficient plugin that delivers rich, characterful reverbs and incorporates a powerful array of tailoring processors.