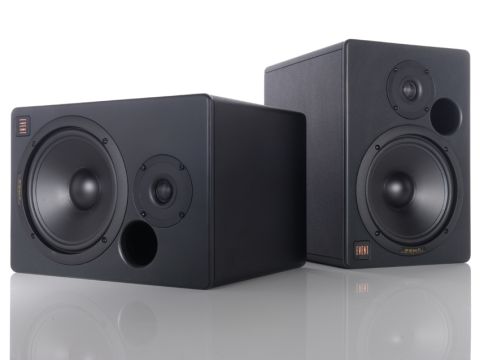 Serious low-end with bags of low distortion power to boot - a pleasure to listen to and work with.

The Event 20/20 has been working hard since the mid '90s winning many devoted fans along the way, but now these bi-amped two-way nearfields have been given a third outing by Event, this time incorporating some of the (electronic) advancements made in developing their flagship model, the Opal.

The all discrete component class AB amplifiers have been designed to deliver more detail and power alongside less distortion.

At 17kg, this is no lightweight design and at 300mm deep the footprint is no small matter either. These are important attributes for low cabinet resonance - knuckle-wrapping the cabinet produces a very short, low thump that belies the structural density and stiffness.

The front baffle uses a hard, rough material coating to further reduce cabinet resonance intermodulation with the speaker outputs. This is a ported design so the intentional low frequency resonance from within the cabinet is piped out through the front-mounted port.

The 20/20BAS has kept to the box aesthetic, eschewing the more curvy lines of the Opal, and just has its edges and corners rounded off to reduce edge diffraction (the creation of additional wavefronts through sharp changes in surface angles that can skew frequency response and stereo imaging).

At the rear of the 20/20BAS are the two inputs (balanced XLR and unbalanced RCA), the IEC power input and three control knobs. These allow for +/- 12dB gain trim and high/low frequency shelving adjustment (+/- 3dB).

For matching settings between two monitors we prefer stepped controls, which these are not, but flipping your monitor feed into mono makes it pretty easy to make adjustments for the room, your taste and the monitor/volume control relationship.

Those expecting the 20/20BAS to deliver the 'Big Ass Sound' as advertised (we're assuming BAS actually stands for Bi-Amplified Speaker) will not be disappointed. Our first (and abiding) impression of these speakers is low-end focus, especially the low mids which are key to the impression of proximity in a mix - we instantly felt the sound stage we're used to come forward.

The combined performance of the LF transducer (woofer), amplifier and ported cabinet keep the low end relatively tight without any obvious ring-on effects or flabby rumblings.

There is no loss of punch in the low-end and into the midrange with vocals, when mixed well, sitting up close in the sound stage without getting fuzzed out by poor articulation, a property the 20/20BAS V3s keep right up into their 'ouch' SPL range.

There is plenty of power here and we didn't find any early onset of distortion or loss of clarity at the louder end of the dial.

The high frequency range is somewhat softer than we're used to and would lead us to mix a little over-bright to begin with, but having spent some time with the 20/20BAS V3s, we quickly acclimatised to their low-end bias and found ourselves monitoring louder than usual.

Transient detail is not reduced by this apparent softness and the tweeter produces a clear picture of the high end right up to and out of our hearing range (currently 18kHz).

We did use the HF shelving trim to compensate and ended up using the whole +3dB to bring the monitors into line with other sets of monitors and by turning up the LF shelving trim we pulled up the low bass to form a flatter bass against the low-mid bias.

We must stress that both of these adjustments were mostly due to our own room and monitoring preferences.

The low end audibly drops off below 40Hz so for those fixated by the lowest of the lows, a sub could be used in conjunction with the 2020s.

A lot of stereo field auditory cueing comes from the high frequency range and so the low end focus of the 20/20s can give them a more centre dominant behaviour, but the stereo width is in no way lacking.

If the mix contains a lot of stereo information in the mids and low mids the 20/20s produce a solid image that allows you to clearly pick out the individual sources.

The centre spot for the best stereo picture is as wide as you'd expect from most good quality nearfield monitors and horizontal movement doesn't create an overly skewed stereo field, but we found the vertical plane a little more prone to degrading phase shifts.

Though reverb tails and the sense of space in sources and mixes are well defined, the low-mid focus can mask some of the quieter cues and thus produce a flatter picture.

When listening to and working on the 20/20BASs, we found many Hip Hop related genres to be well suited, allowing a clear picture of the relationship between kick, snare, bass and vocal to be perceived and thus manipulated.

Conversely more intricate acoustic-instrument-led music is a little harder to balance, though not in any dramatic way.

Considering the price, the 20/20BAS V3s definitely prove value for money, particularly if the high build quality is taken into account. There is a lot of raw power to fill small studios and will match dB for dB many more expensive nearfields in larger production rooms.

If you have enjoyed working with 20/20s in the past or work in Hip Hop, R&B or any genre where the low-end is boss then do give these powerful puppies a listen.