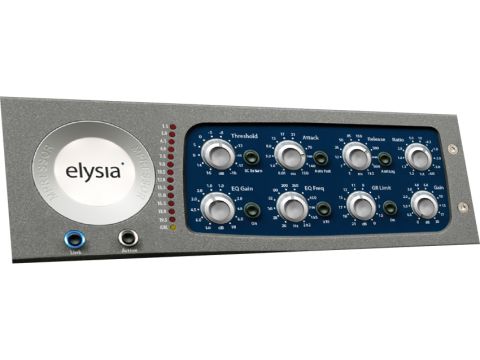 With the reputations involved you'd expect something special from the Mpressor and it doesn't disappoint.

There are loads of hardware compressors out there so it's pretty hard for a manufacturer to come up with something new.

One of the few companies to have blazed this particular trail with any success over the past few years has been German manufacturer Elysia. Its Alpha compressor has found its way into many a big mastering studio; with its stunning audio quality and incredible range of control it has quickly established itself as a tool of choice for many a top mastering engineer.

The Mpressor has had the same kind of reaction from top recording engineers. Besides being a great straightforward compressor it has a few tricks up its sleeve that really help it to stand out from the crowd. However, the price for the hardware units does put them firmly out of reach for a lot of potential customers so it seems like a wise move to get this software version - which has been developed with Brainworx - out on the streets.

To start with, you have a great straightforward compressor with controls for threshold, attack, release, ratio and gain make up. Attack and release times are very comprehensive, attack ranging from the ultra fast 0.01ms to 150ms which gives you plenty of options for shaping the front of a sound. Release times vary from 5 to 1200ms giving lots of scope from pumping to smooth.

The Mpressor will grab hold of and shape pretty much anything that you throw at it - from buzzy synths to funky guitars and any kind of drums or percussion. But the real surprises come when you bring some of its more exclusive features in to play.

The first of these is the Auto Fast switch on the attack time. When a sound is a mix of attacking and sustaining components it's often hard to find an attack time that complements both. Too short and the sustains suffer, too long and some of the peaks you want to tame slip through.

What auto fast does is to use the setting on the knob as the basis for all softer or more sustained material but when it gets loud or attacking, it drops to a much shorter attack time. The result is a very even feeling compression that never lets go, allowing you to sit an instrument in the mix without any unwanted peaks and troughs. It's particularly useful for clean or crunchy guitars, basses and loops where you often have a mix of short transients and sustained elements.

Next you have the Anti Log button next to the release knob. This applies an antilogarithmic curve to the release time which is normally linear. A linear curve allows for a smooth release of compressed signals which sounds more natural to our ears and less evident.

Anti Log turns this characteristic on its head and makes it very audible indeed. Pumping drums and quieter percussive elements in loops can be brought to the fore. Dry drums can start to sound ambient, and in combination with the attack time you can really stick some energy into a groove.

Below the release knob sits the Gain Reduction Limit control. This enables you to set a maximum amount of gain reduction independent of the threshold control. 'What is the point of that?' you ask. Well, it means that you can set your threshold higher than you normally would so that the characteristic of the Mpressor is based around heavy compression, but you can tailor how much dynamic range you lose.

In practice, this means that, although you have the excitement of hitting the circuitry hard, the sound doesn't choke, so you can allow it to breathe more. The overall effect is a bit like mixing a compressor on another pair of groups, but still holding the peaks back. It's very useful, especially when it comes to balancing a complete kit or a loop into a track once you have found the sound that you like.

The bottom left of the Mpressor has the two knobs and switches of the Niveau Filter. This is an EQ that balances its cut and boost around a centre frequency which can be set anywhere from 26Hz to 22kHz. As you turn the knob clockwise you boost above the centre frequency and simultaneously cut below it. Turning anti-clockwise boosts below and cuts above.

This very simply alters the character of the sound from dark to bright and is surprisingly effective. At its most extreme settings it becomes a high- or low-pass filter. We can imagine using the plug just for this EQ.

So, putting it all together with those negative compression ratios, you have a pretty useful bag of tricks here. From subtle but controlled compression to radical pumping, tonal shaping and complete changes in the feel of a groove, the Mpressor will certainly make a mark on your music. Add to that great sonic quality and this is a very powerful and musical tool that you'll find yourself reaching for every day.

Listen to what the Mpressor can do: